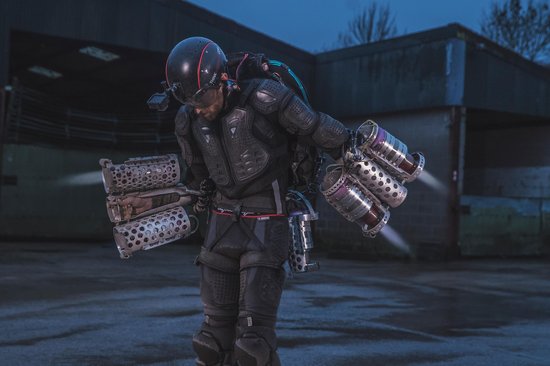 Richard Browning is a former Royal Marine Reservist and inventor from the United Kingdom who has put together an Iron Man style suit complete with six mini jet engines and a carbon fiber exoskeleton. The product is being created by his new startup called Gravity, and boy, does it look cool! The video below kicks off showing the experimental turbines Browning has created, that look similar to a car exhaust that he straps to his forearms.

He shows off blasting gusts of hot air across a roadway. If nothing else, he’s made a bloody good long range hair dryer! Soon Browning is jumping around and floating in the air as if he’s on the moon with two of the suckers strapped to him, and then suddenly he’s flying off the ground with the aid of four of the turbines strapped to each of his arms and legs. With a backpack holding twin fuel bladders, the inventor looks like a space age Ninja Turtle met Tony Stark and decided to try and join the Avengers. Speaking with Redbull.com, Browning revealed that the suit is probably capable of “flying at several hundred miles per hour, and at thousands of feet,” which sounds absolutely insane. The strength needed in order to control the contraption is apparently immense, with Browning having to cycle over 150 km and complete grueling exercises just to ensure he definitely has the strength to control the high powered suit.

Imagine having jet engines pushing your body around from every direction, and then imagine trying to control them! Browning surely is a psycho of the highest order, but he also plans to successfully complete the first ever human propulsion flight within the next year or two. In just a few short years we could all be zipping around in our own personal Iron Man suits if Browning has his way!

Check out the video of Richard Browning piloting the suit below!

As you know, we f**ken love dogs here at Ozzy Man Reviews. Deadset, we reckon dogs are the best. We bloody love people too. Yeah, nah, we reckon most people are pretty f**ken tops. That’s why we’re stoked that Fezco, ...