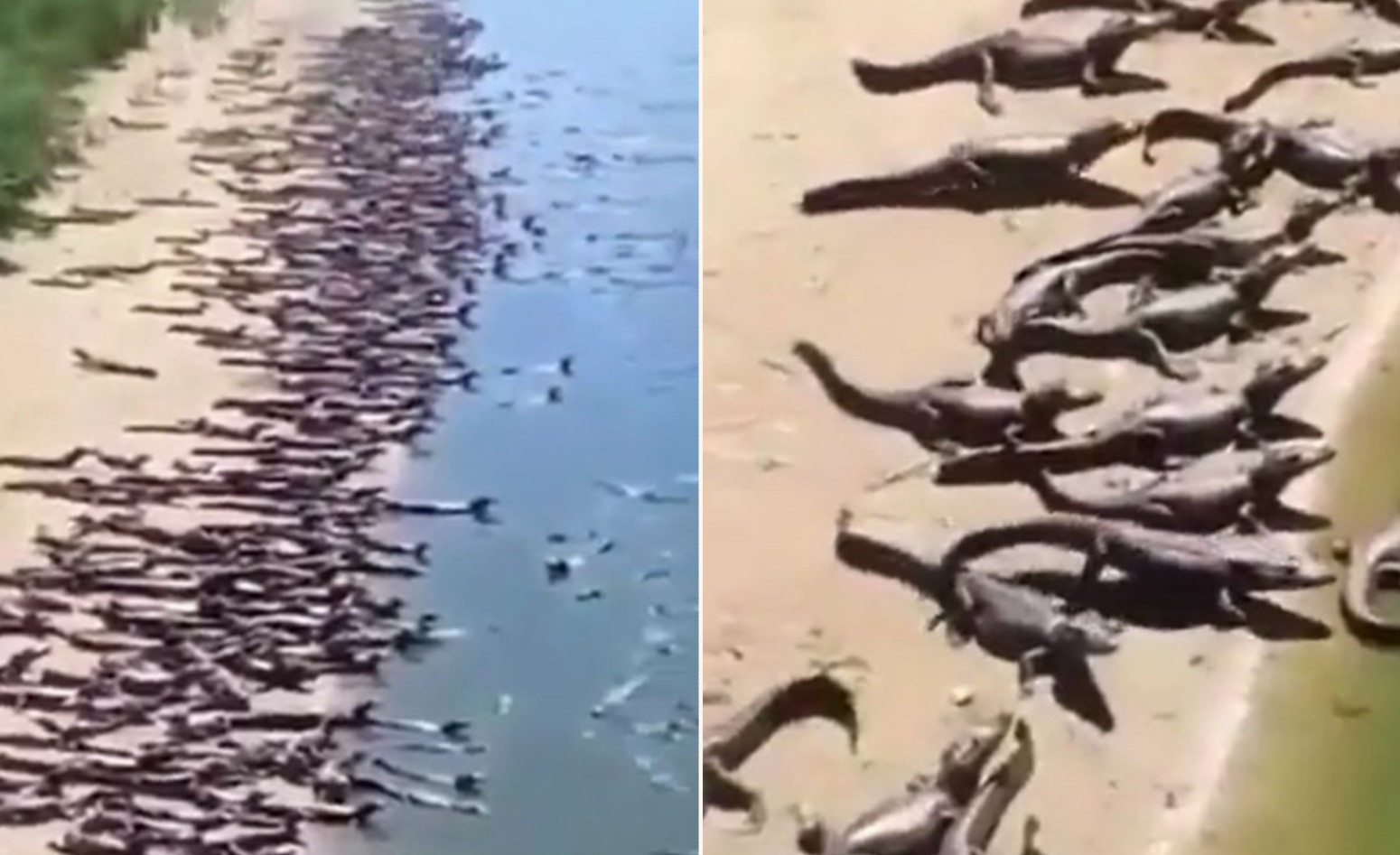 Yeah, look, you f**kers know that we know that you know we love crocs, caimans, alligators and bloody gharials bigtime. Yeah, nah, we do. We reckon they’re mintox as f**k, and you knew we’d be talking about the viral video doing the rounds online that shows footage of ‘thousands of crocodiles INVADING a Brazilian beach’. So, yeah, here it is…

OK, so if you don’t know about this one, there’s a viral tweet going around that suggests Brazil’s population is in f**ken panic mode after a metric s**tload of crocodiles decided to ‘invade’ a tourist beach. Matter of fact, why are we explaining it? Here you go:

🇧🇷🐊 In #Brazil, an invasion of #crocodiles that have flooded one of the beaches with several hundred, even thousands, and the local population is panicking.

Are the animals worried about something? A #volcano or an #earthquake is preparing?😰👇👇👇 pic.twitter.com/m8W05HDSli

“In Brazil, an invasion of crocodiles that have flooded one of the beaches with several hundred, even thousands, and the local population is panicking! Are the animals worried about something? A #volcano or an #earthquake is preparing?”

They just wanted to feel human for a minute 😂

That s**t went gangbusters, and people were all over it. Yeah, deadset, they f**ken shared the shit out of it. Of course, with a bit of hindsight, people are now looking at that tweet and rolling their eyes. While it’s not harmful fake news, it is pretty sensationalist, and it misrepresents a lot of s**t.’

For starters, plenty are pointing out that it’s not a tourist beach. Nah, it’s footage from the Pantanal wetlands. Some are saying those aren’t crocodiles but caimans, and others are saying that no one’s panicking, so what the f**k?

This is not an invasion, locals are not panicking.

This "beach" is part of the Pantanal aka the largest tropical wetland, as well as perhaps the most pristine, in the world.

Oh, and, these are not crocodiles – they are Yacare caiman.

And basically, we get it. After all, you can’t let the truth get in the way of a good yarn, and if you really thought the crocodiles were invading…well, let’s just say that you’d believe a lot of things.

No all those crocs were deep faked

Anyway, further investigation shows that a Brazilian fishing company shared the footage on Instagram a while back – and they didn’t sensationalise it either. Nah, they were just like, “Yeah, we think there’s some water here with these alligators somewhere…”

Most all are facing the water…🧐

So yeah, there you have it. The crocs aren’t invading the beaches, but the caimans are chilling on the riverbank. It’s nearly the same, but not quite. When you add to that the World Wildlife Fund’s input, you can see this really is a non-story. They reckon that the Pantanal is home to ten million caimans and this s**t isn’t uncommon.

it's wrong. These animals are native to this environment. This place is in the interior of Brazil, not on the coast, it's a river beach, and the alligators are only living one more day, it's nothing so exceptional.

Still, that’s a lot of crocodiliacs. Yeah, nah, that’s a hell of a lot.

Final thought: Look, all we can really think to say here is this: don’t believe everything you read. But, at the same time, when you’re spinning s**t, don’t let the truth get in the way of a good yarn. Yeah, nah, don’t do that either. Anyway, let us know what you reckon. Till next time, ya legends!

Just in case you missed it, here’s one of Ozzy’s latest commentary videos…nutcracker compilation #3