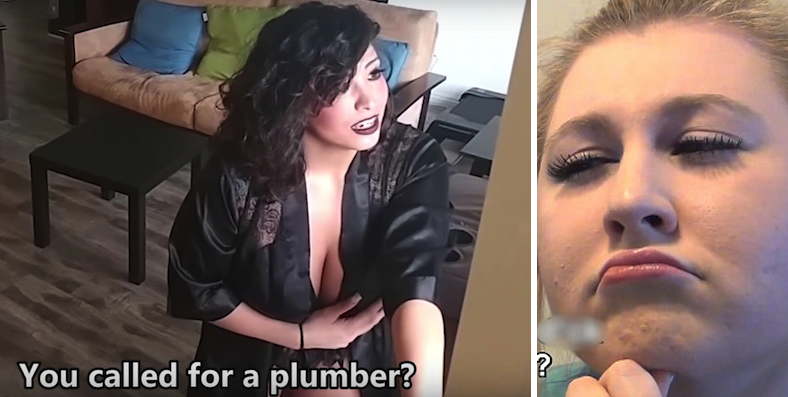 Most of us have seen these god-awful ‘catch a cheater’ clips before and in a lot of them, the guys being tested let their dicks make the decisions but, holy shit, the dude in this video is a goddamn saint!

His paranoid girlfriend contacted the YouTube channel To Catch A Cheater and arranged a sting while he was at work. In this video, a busty ‘customer’ named Alison has called up to get a plumber around to unblock her sink.

The boyfriend knocks on the door and Alison answers, flashing her sizeable cleavage in a skimpy dressing gown. The absolute bloody gentleman immediately apologises, saying “I’m so sorry, did I catch you at a bad time?”

He even offers to wait outside if she wants to go and get changed but Alison insists that there’s nothing to worry about.

She shows him to the blocked sink and he gets straight to work while the actress makes suggestive small talk, saying shit like “I think it might need lubrication” and “it’s pretty deep”. God damn. Still, the fella keeps his cool and unblocks the sink in no time at all. It’s at this point that things get super awkward and kind of creepy; Alison ditches the not-so-subtle innuendo and straight-up propositions the guy but instead of taking the bait, he lets her know in no uncertain terms that A) He has a girlfriend, and B) He isn’t interested.

She’s a persistent wee lass, however, and traps him inside the house. Even her assurances that his girlfriend will “never know” fall on deaf ears and he replies “Yeah, but I do” and “I would feel horrible.” What a smooth talker…

Eventually, he is able to escape her clutches, the fucking champion. I wonder if he immediately gave himself a hand shandy in order to get all that pent up frustration out of his system…

Amazingly, the girlfriend is less than impressed with his stellar performance; the guy from To Catch A Cheater tells her that it “Looks like we’re gonna have a good Valentines after all,” to which she replies “Well, we’ll see, there was a few…erm…” and when he asks her to elaborate, she says “I don’t know, he has a look and I can see that look that he gives other women. He’s very flirty.”

The presenter puts her straight, though, stating “I think a lot of girls would be very happy with that.”

When he asks what reward her boyfriend will get for Valentines Day, the nutter actually replies “I got train tickets to Modesto to visit my Mom.” The presenter gives an absolutely beautiful deadpan reply; “What a lucky guy, huh?”

Considering the shit that some dudes get up to behind their spouse’s backs, this lass should be grateful that she’s got such a loyal one. Still, at least he got a trip to Modesto to visit her mum out of it, the lucky bastard.

WATCH THE CLIP ON THE PLAYER BELOW: