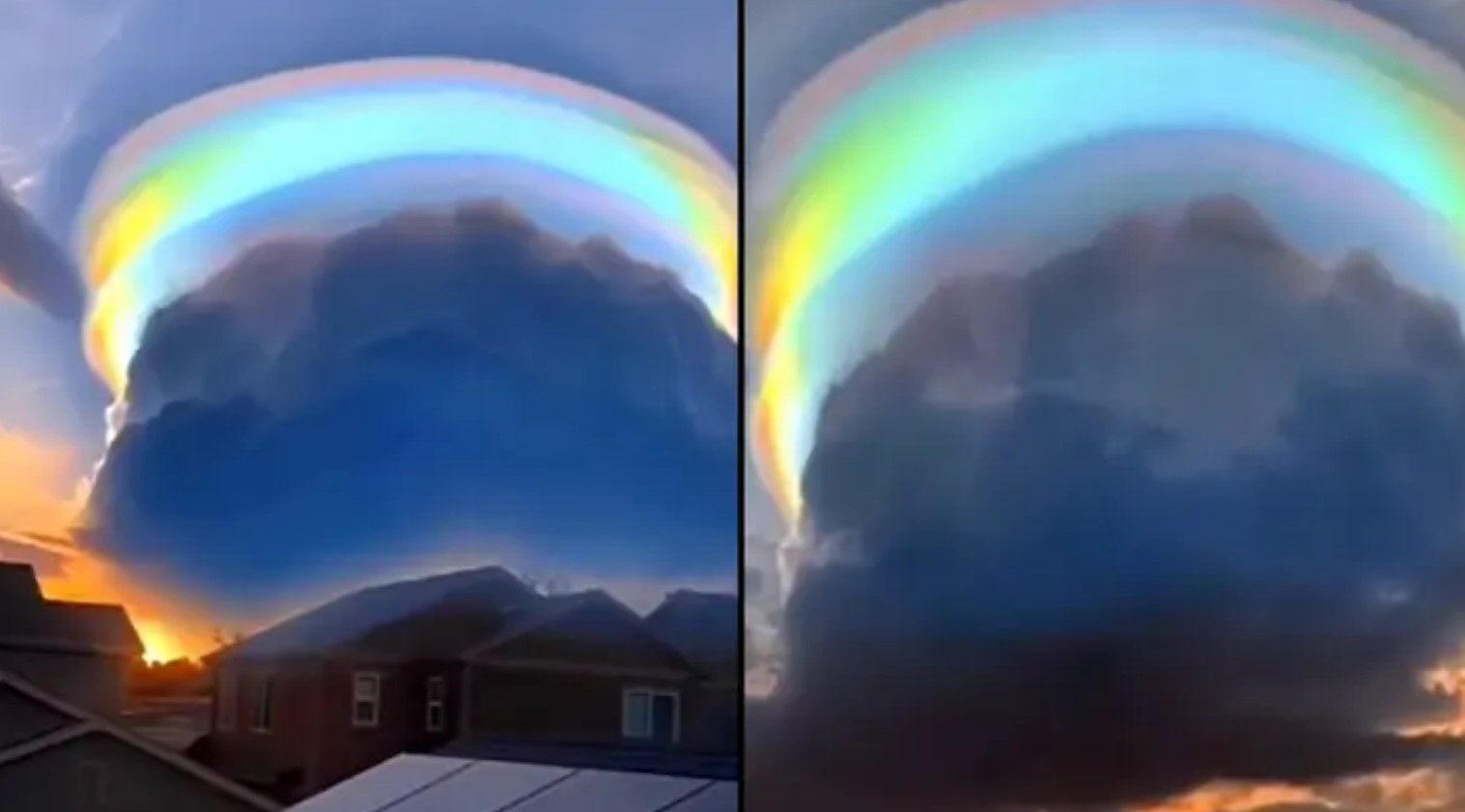 We’re not gonna lie, we’re actually pretty f**ken easy to impress when it comes to cool stuff in nature. Deadset, we see a particularly fluffy cloud and we’re thrilled to bits. A nice green tree? You’d better believe we’re in awe. A rainbow? F**K YES, NATURE! So, imagine what happens when we see clouds like this one from China…yeah, basically, our minds get blown and we tell you lot about it. Check it out…

OK, so basically, you can see this cool-as-f**k phenomena in the images, so you can imagine why locals were impressed by it. It’s a rainbow cloud. It’s f**ken proof that unicorns exist. It’s f**ken synthwave album art given physical form. Yeah, fair dinkum, it’s amazing.

RAINBOW MAGIC : It may look fake , but this " scarf cloud " has been spotted by locals in Haikou , China.Also known as iridescent pileus ,these clouds get their artificial,looking colours when sunlight diffracts off the droplets and ice crystals in the cloud ,creating a rainbow pic.twitter.com/i2BMfxMXM5

Best of all, though, it’s a known phenomena that’s even got a name. Yeah, nah, it’s called a scarf cloud or ‘pileus’. According to Skybrary, “it’s a small, horizontal, lenticular-like cloud appearing above a cumulus or cumulonimbus cloud.”

Apparently, they don’t usually last long because the main cloud beneath them rises up and absorbs them. Still, that doesn’t mean they’re not impressive as f**k. Nah, yeah, have a squiz at it – it’s gorgeous!

Still, as Skybrary also tells us, they’re a sign that things might be getting hectic with the weather: “…they are usually indicators of severe weather, and a pileus found atop a cumulus cloud often foreshadows transformation into a cumulonimbus cloud, as it indicates a strong updraft within the cloud.”

Pileus or scarf clouds form above rising cumulus clouds due to changes in humidity and temperature. https://t.co/srFYl3ZWrY

Despite that, the people of Haikou in Hainan Province didn’t worry about that s**t when they saw this the other day. Yeah, nah, they grabbed their cameras and shared it with the world. And we’re bloody glad they did!

Final thought: Yeah, we say this a lot, but nature is f**ken marvellous. Have a go at this beautiful example of nature’s magnificence. If you’ve seen one in real life, let us know. S**t, share your pics if you’ve got ‘em. We’d love to see more of these!

This stunning rainbow cloud was spotted in China🤯 It's called a pileus cloud, or scarf cloud, and is formed by condensation when the air rises quickly. The color comes from sunlight diffracting off water droplets and ice crystals 🌈 pic.twitter.com/pWIyWNXzEZ

We don’t know about you, but we’ve often wondered how much on-screen Hollywood nudity is real. Don’t get us wrong, we know that a lot of times normal bodies are just…normal bodies, but sometimes you’ve gotta wonder if...