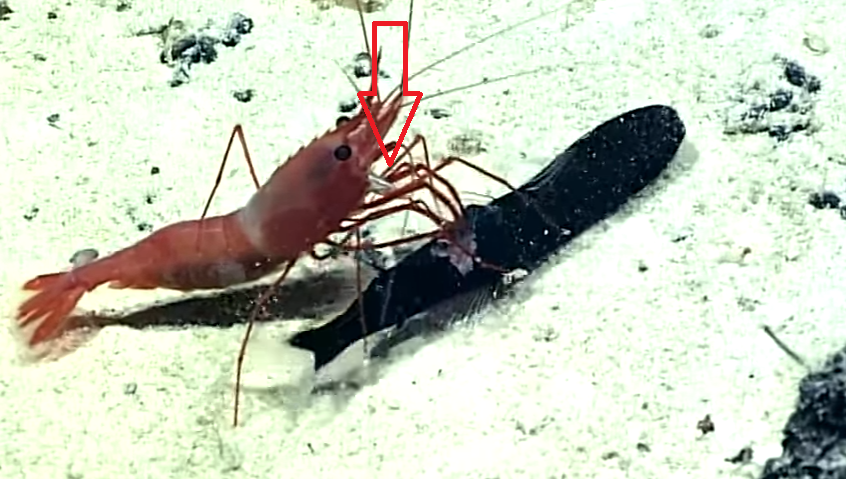 Shrimp Rips Open A Fish’s Stomach To Find Another Fish (That It Proceeds To Eat)!

Nature man, you are crazy. I’ve seen some weird f*cking shit in my time but I have never seen anything like this. Ok, let’s set the scene here. You are hungry. I mean VERY hungry. But you want something in particular. Like, hot wedges with some pepper gravy and mayonnaise. What if the only way you could have that was to OPEN UP SOMEONES STOMACH WHO JUST ATE THAT THEN EAT WHAT THEY HAD JUST EATEN! Like many pregnant women, the Caridean shrimp will also go to extreme lengths to fulfill their queer and often staggering appetite. It’s a shrimp that can be found in fresh and salt water and are said to do quite drastic things in the search for food. The video from the National Oceanic Atmosphere Administration starts with a Caridean shrimp doing what looks like a fairly innocent tango with a Dragonfish. However the dance takes an almighty turn when the shrimp when the shrimp decides it’s going to eat the Dragonfish alive.

You can then see the shrimp has pinned down it’s victim, and starts to dig into the stomach of the fish. With the Dragonfish writhing the whole time, the shrimp takes out not one but two little fishies to eat from within the fish it’s eating. Poor Dragonfish, I don’t think you can come back from that really. Let’s also spare a thought for the fish that was pulled out of the Drangon fish’s stomach, that poor guy has subjected to the horror of being eaten not just once but twice! You can hear the commentators (who I believe are aquatic experts) saying “I’ve never seen that kind of predation action before in my career”. Well one tends to hope that you haven’t, too much of this gear and you’ll definitely need some counseling or cognitive therapy.