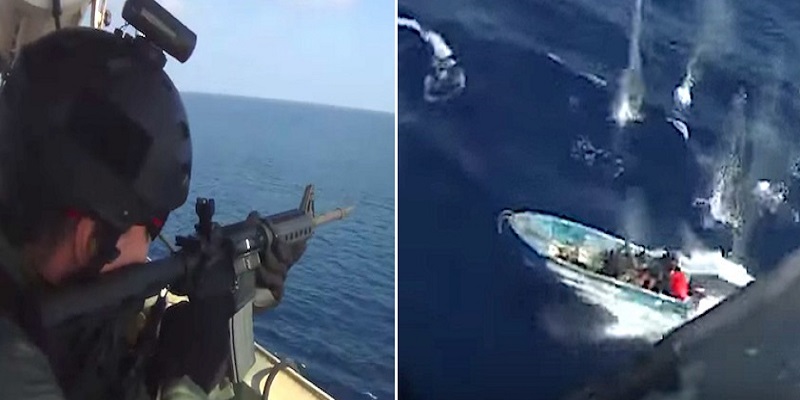 You could be forgiven for thinking that pirates are about as extinct as dinosaurs or wooly mammoths, given we don’t see much swashbuckling action on the seas nowadays.

Gone are the days of black powder rifles, cannonballs and buried treasure, but it seems there are still folks off the coast of Africa trying to make a crust by robbing passing cargo ships.

Somalia is particularly well known to shipwrights as a haven for piracy, and not the kind where you’re getting black market copies of NSYNC’s No Strings Attached or one of those Best of the Spice Girls albums.

No, this is a place where people are routinely shot at, held for ransom or just plain murdered in the pursuit of pirate booty.

Many cargo ships now employ private security firms to keep their cargo safe as they move through the region as they head down to South Africa or up past Sudan on the way to Egypt. Those waters have been known to be teeming with sharks and pirates, and you need a pretty good security force to keep them at bay. Whilst things had seemed to settle down off of the coast of east Africa for a while, commercial ships must once again shore up their defenses against forced boardings as the United States Defense Department a statement on Sunday, warning that Somali pirates are returning to waters off East Africa after years of calm.

A half-dozen pirate attacks on commercial ships off the coast of Somalia in the past eight weeks meant that civilian mariners and shipping companies must again be on high alert. It has also meant the internet has renewed interest on the subject.

The footage below was uploaded on April 20, it’s believed to have taken place in the Indian ocean in 2012. Despite carrying out an illegal and dangerous operation, the pirates don’t exactly stage a sneak attack. If anything they should be flying a massive flag saying “HEY, YOU GUYS, WE’RE COMING TO ATTACK YOU, JUST THOUGHT WE’D LET YOU KNOW IN ADVANCE!” 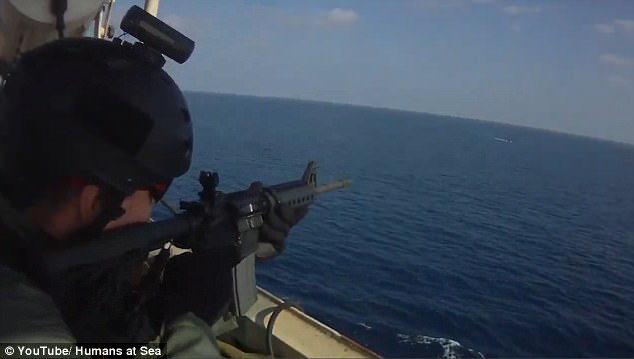 Attacking in a group of three, one of them races up toward the cargo ship as quickly as they can in a tiny speed boat, and soon their boat and the water around them is being shot full of bullets. Far off in the distance two other boats look on and seem to be firing on the cargo ship, but to no avail.

These security guys are well versed in the tactics of the Somali pirates. The sound of M4 carbine rifles fills the air, and it’s pretty clear that these pirates have picked the wrong ship to try and ambush.