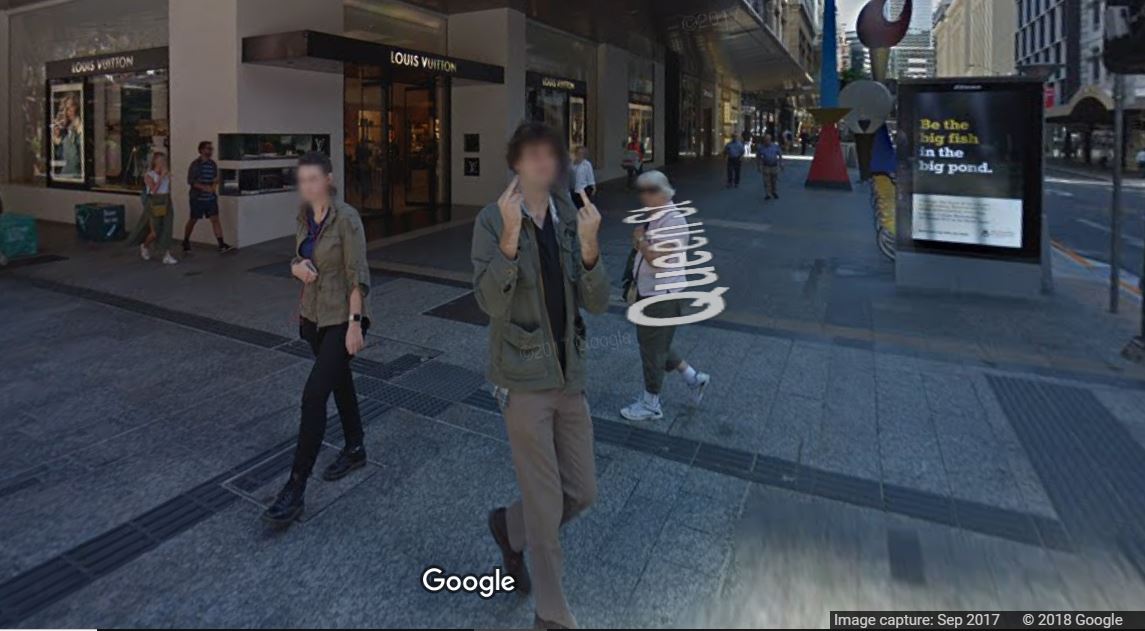 The Google Maps camera really is, when you think about it, the ultimate in ‘creepy’ technology. It’s got photos of your house, your work place, your favourite hangouts, and all your friend’s places too. It’s the ultimate stalker, because while it’s going around, I reckon very few of us have actually seen it doing its thing. Fortunately, every now and then, a hero comes along and when they encounter the mythical Google cam, they pull the kind of juvenile stunt that makes the average bogan pretty happy indeed.

For the tale of this particular hero’s exploits, we’re taking a trip to Brisbane. The capital city of sunny QLD. If you know Brisbane, you’ll recognise the scene: The Queen Street Mall. It’s the centre of commerce in this lovely city, and the kind of place you can enjoy a beer in a trendy little bar while you do a spot of shopping. Or something like that.

This particular hero, he seems to just randomly materialise somewhere outside the gift shop and Jimmy’s on the Mall, and I sh*t you not, he has a gift for all of Google. From there to the end of the mall (outside Louis Vuitton), this bloke gets right in the lens and flips two flying birds.

It’s silly and it’s juvenile, and it’s bloody awesome despite all that. This isn’t just a casual middle finger; it’s commitment to a bit. It’s determination to get yourself online, immortalised for all to see. The easiest way to find the bloke is to search for Louis Vuitton Queen Street Mall. Spin the camera around in street view and you’ll find him pretty quickly.

As for the cameraman filming the mall, he clearly did not give a monkey’s. He was getting his photos and he was getting out of there.

Final thought: Is this a local bloke? Can we identify him? He’s an uncouth bugger, but we’re gonna nominate him for a top bloke award just because of his commitment to the bit. Good work fella!

Click on the gif below to get a nice overview of him in Google Street view!