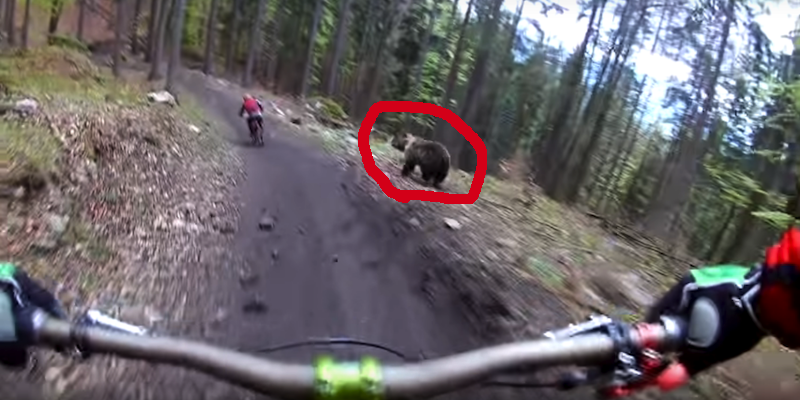 They say if you’re ever unfortunate enough to cross paths with a wild bear, you shouldn’t run from it; they are wired to chase things and their top speed is about 56kmph (35mph) which is faster than Usain Bolt in full flight. I say if you’re with other people, f*ck it, you don’t need to outrun the bear, just the slowest person in ya group! The one thing I definitely wouldn’t do, however, is stop for a goddamn look at it, which is exactly what these mad buggers do… Having a bear bearing down on ya would be bloody unbearable (OMG I’m so sorry for that one, guys!)

In this clip, which was originally reported to be from Russia but people have been saying is actually from the Czech republic, two mountain bikers can be seen flying through the forest at top speed when all of a sudden a bloody bear comes into shot and begins to chase the lead rider. None the wiser, he plows on through the forest until he hears his buddy shouting from behind. The rider stops and has a chat with his mate, who undoubtedly explains that he was being chased by a f*cking bear but instead of getting the hell out of there, this pair of maniacs decide to stay put and try and locate the thing!

Now, considering how fast a bear moves at top speed, I’m not sure they would be able to outrun it in a straight sprint anyway but if it was me, I reckon I’d give it a bloody go. Not these lads, though; they actually look genuinely disappointed that they can’t find the guy. Fatalities from bear attacks are actually extremely rare; in the 2000’s, there was a total of 27 fatalities caused by wild bears in North America, meaning that you are much more likely to be killed by dogs or even lightening.

Still, if I knew the teddy bears picnic was going on in the woods near me, I’d be getting the hell out of there, a-f*cking-sap!