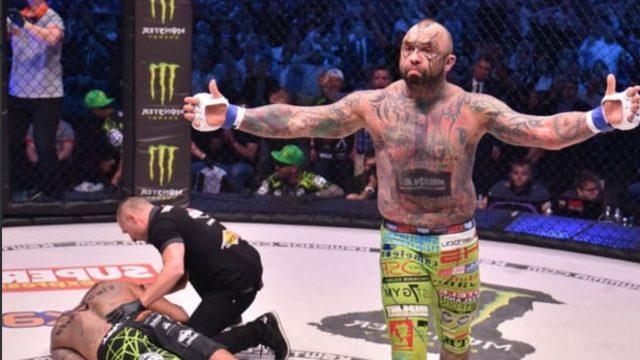 There comes a time in everyone’s life when they look forward to something big. They prepare for it, mentally and physically. They train for it, months, years, if not decades in advance. And when it comes down to crunch time, this happens. I can imagine a portion of the audience may have felt a little disappointed. The entire Konfrontacja Sztuk Walki 39 (aka KSW, you just pretended to be able to pronounce that didn’t you?) Marcin Rozalski vs Fernando Rodrigues Jr. lasted a full an entire 15 seconds into the first round. Pre-fight promotional videos focused on the religious beliefs of the two men, with Rozalski a self-proclaimed Satanist and Rodrigues a practicing Christian. I think this serves as a reminder to all that no deity or deities give two shIts about the sporting events of us mere mortals. I don’t know about you guys but I’d be praying too if I was about to fight Rozalski. After the fight was over Rozalski, can be seen moving to check if his opponent was okay – or ground and pound him if he wasn’t already too f*cked to fight – it’s hard to tell.

If you slow it down, you can literally see the point where Rodrigues arrives at destination fIcked, with his entire body going limp before face-planting onto the mat. This is just one more addition to an ever growing series of MMA fights where opponents have found the mat in an incredibly short period of time.

Here’s the video that will be appearing in new “Worlds Fastest MMA Fights” compilations, coming soon to a YouTube channel near you. I wouldn’t worry about making popcorn for this one.