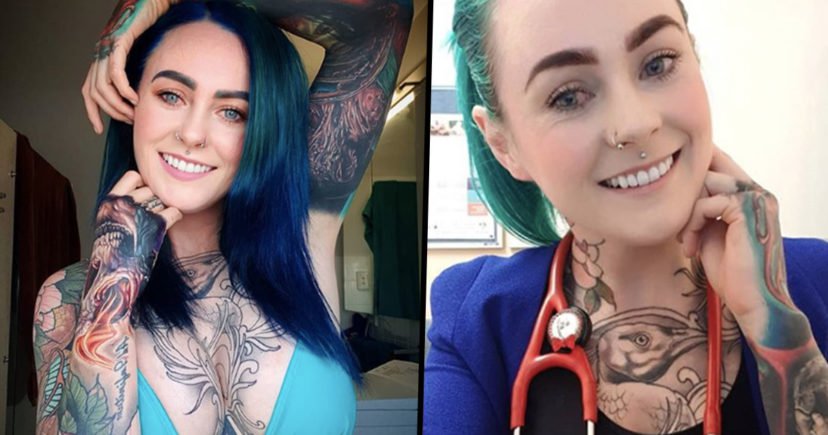 ‘World’s most tattooed doctor’ reveals the discrimination she faces

Although most sensible people would say the world’s acceptance levels have come a long way in recent years, we’d be naive if we were to think the journey was over, the battle won and the dinner devoured. Yeah, nah, if we’re honest, there’s still plenty of room for further improvement. And that doesn’t only refer to the idea of not being prejudiced against races, religions and sexualities either. As Dr Sarah Gray – a woman who claims to be the most tattooed doctor in the world – explains, we still need to be more accepting of people’s lifestyle choices too.

In an interview with the Daily Mail, the Ozzy doctor, whose previous Miss Inked Australia and New Zealand titles show that er, yeah, of course educated professionals can also have tattoos, ya numpty, revealed that she has experienced prejudice in public and at work on several occasions – all because of her tats.

Now, first of all, Gray does have a shItload of tats, but as a medical doctor she can probably afford ‘em. Of course, anyone with half a brain in their head is already shrugging their shoulders and thinking, ‘yeah, obviously her tats don’t affect her skill level.’

In fairness, while she does mention she gets a little bit of stick at work, it seems to be in the public sphere that she’s noticing what she calls discrimination against her lifestyle choice. In particular, she points out that high-end fashion stores, restaurants and nightclubs seem to have it in for her.

Take me back to this hammock in Fiji please. I've been playing housewife all day and I'm so bored. Suggested activities I could attempt please list below ?? #takemebacktofiji #hammock #sunshine #holidaywithdrawals #fiji

“Quite a few night venues seem to have this policy and although it doesn’t affect me very often as I hardly go out, it can be super frustrating when we get categorised as ‘bad people’ or being gang afflicted due to our colourful skin.”

As for fashion stores, she says, “They all served other customers first and wouldn’t even make eye contact with me. I waited politely for ages and eventually gave up and left. They did themselves out of a sale and I saved myself $1,000, so I guess that’s one bonus!”

When it comes to how her tattoos are seen professionally, she explains that, “Having colourful skin in no way affects your skill level and with all the anti-discrimination laws now it wouldn’t be appropriate to compartmentalise or treat me differently based on my appearance.

“I’ve worked really hard to develop good professional relationships as I’m fairly memorable, so I’ve made sure I’m memorable for the right reasons through hard work, determination and an always positive attitude. Occasionally someone disapproving will say a negative comment under their breath or shake their head at me, but these situations are rare.”

Today I was invited to speak to the year 7-11's at my old stomping ground Ardrossan Area School. Having been the only graduating student to pursue a career in Medicine, it was a humbling experience to speak some words of 'wisdom' (if that's what you'd call them) to some young pliable minds. I was able to reminisce on my days as a young pain in the ass student and give some advice on how to follow your dreams. Being from the country has given me a world of opportunities that I would not of had if I completed school in the city. You can achieve anything if you put your mind to it and work hard. I was also presented with a self portrait by my former art teacher that I had done in year 11! #followyourdreams #AAS #healthday #medicine #inkspired #inkedandemployed #dontjudgeabookbyitscover

Final thought: The majority of the general public seem to embrace tattoos these days, and they’re certainly no longer seen as something that only criminals and sailors have, but as with anything, there’s always a group that doesn’t want to accept that the world is changing. Hopefully we can change that in the near future and people like Gray – who like to wear tattoos – can be respected for their contributions to society rather than for their appearance.