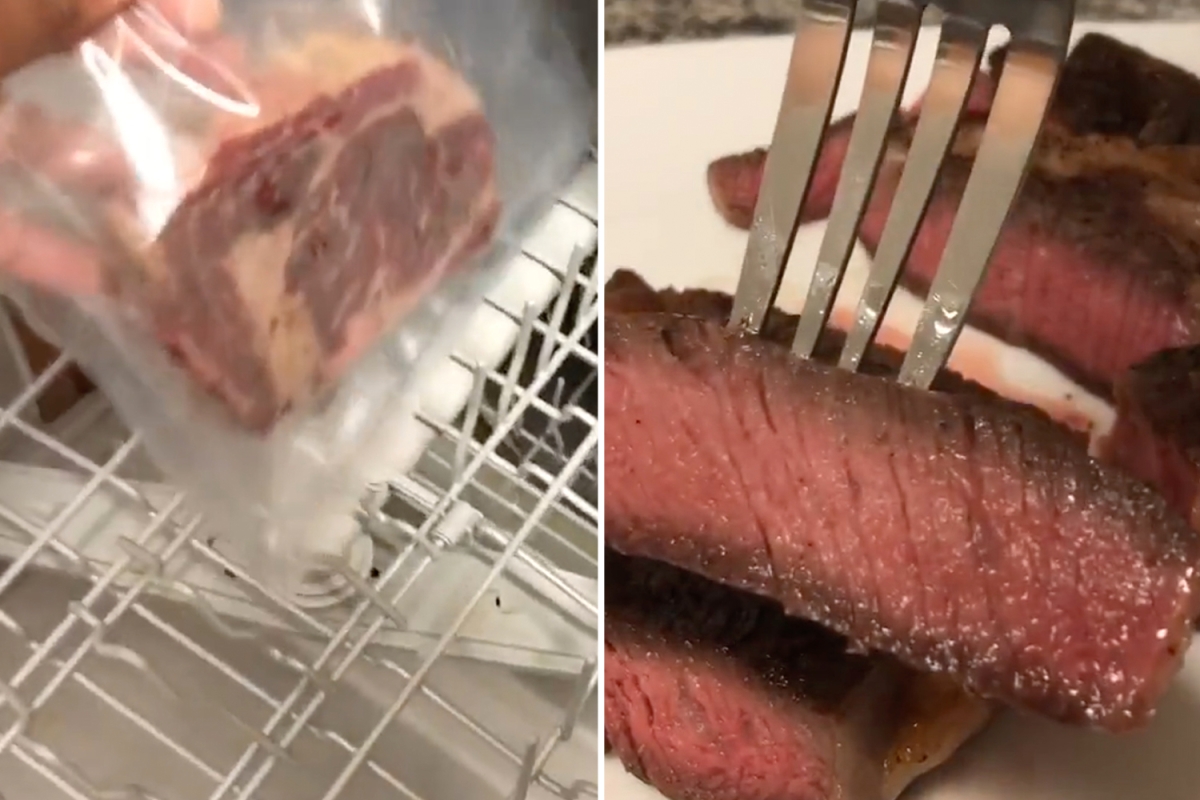 When it comes to steak, there are a few schools of thought on the best way to cook the bugger. Some reckon a barbecue is the dog’s bollocks. Others say you should chuck that s**t in the oven, and even more reckon that an old-fashioned griddle is the undisputed king. Of course, those aren’t the only methods. Yeah, nah, some unconventional blokes and blokettes like to rely on other methods. Like the dishwasher. Deadset. Check it out…

All right, we’re not ones to cast judgement unnecessarily, but we’re gonna do it here. We reckon you shouldn’t cook s**t in your dishwasher. We reckon it’s a fair dinkum stupid idea, and you’re asking for ruined food if you do it.

With most ways of cooking steak, you put it in the pan for 2 min just to brown the outside. But all the internal cooking was done in the dishwasher!

Having said that, we might be scared to try new things. After all, one US reporter, Michael George, is of the opinion that dishwasher-cooked steak is f**ken amazing. No s**t, after trying it, he made the following claim on Twitter:

“Omg it actually worked! I cooked a steak in the dishwasher and it came out AMAZING!”

Oh I have one. This was just for science!

Obviously, we’re gonna call bulls**t, but we weren’t there, and we might be letting our prejudices get the better of us, and if we’re properly fair to him, he does claim later on that the whole thing was done in the name of science.

Anyway, when you watch his video, you’ll see the whole process, and there is a bit more to it than just dropping a raw steak on the top shelf, whacking the enviro-cycle on and coming back in a little while.

We’re still not sure, we’d go for it, but f**k it, if we were there, we’d probably have a munch. Wouldn’t you?

Final thought: All right, we’re throwing this one over to you lot. Is this the next wave of viral challenges, or should this s**t see people going straight to jail without passing go and without collecting two-hundred dollar-doos? Let us know in the comments section.

Omg it actually worked! I cooked a steak in the dishwasher and it came out AMAZING! @MGEatsTheWorld pic.twitter.com/A3ZuiFM0dL

Man, as you know, every now and then, s**t from the past seems to come looping back on the internet. Most of the time, you can go, ‘ah, yeah, seen it,’ and move on. Sometimes, though, it really does ring a bell and ma...

These bloody videos of tradies and builders smashing s**t up after the customer ‘refuses’ to pay seem to be pretty bloody popular at the moment, and that’s why we’re not surprised we’ve got another one for you here. A...