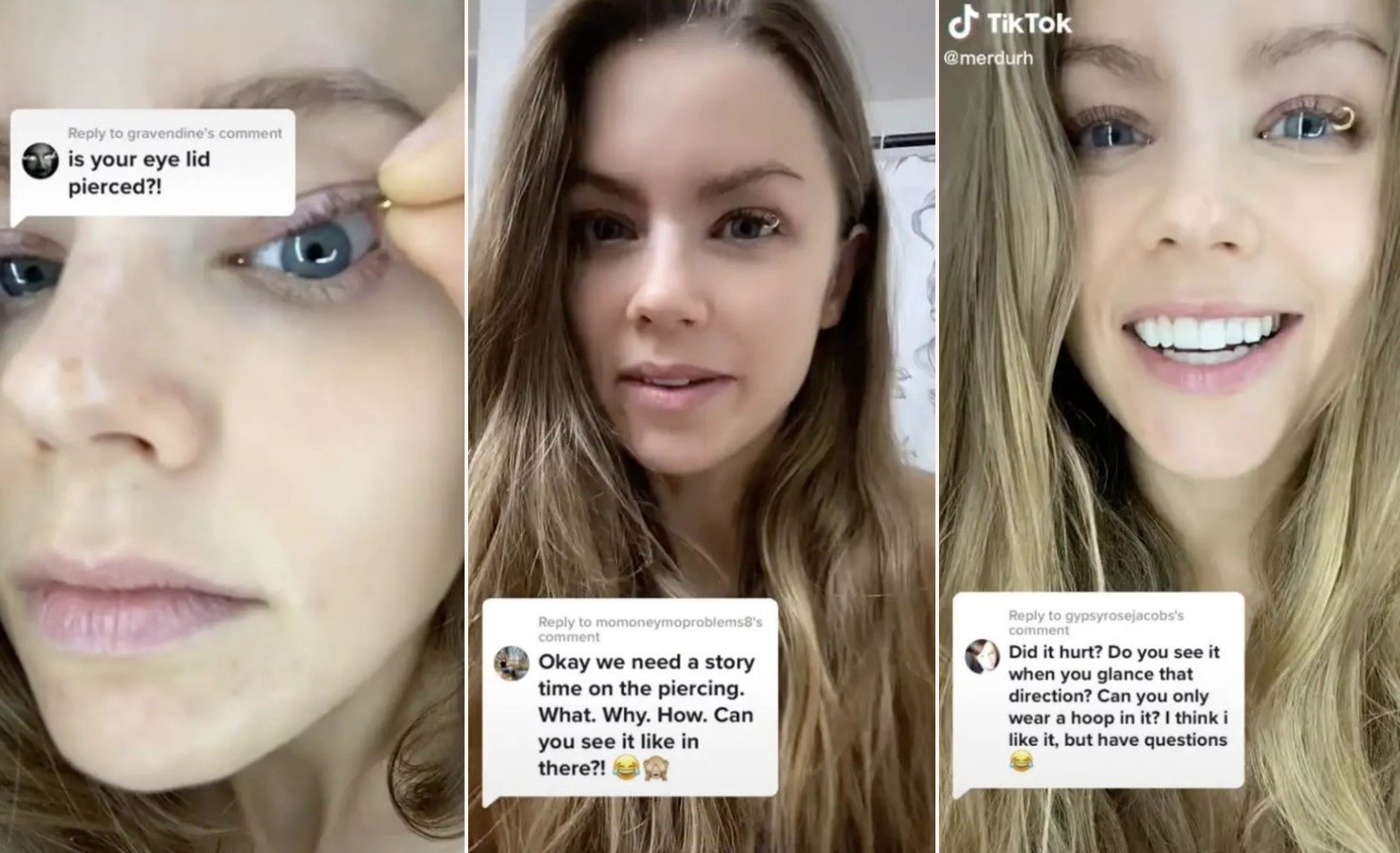 Here at Ozzy Man Reviews, we f**ken love that we live in a world where people are free to express themselves in awesome ways. One of the things we love most is body modification. Not because we’d necessarily opt to do anything major, but because there’s so much variety and it makes the world a more interesting place. One of the interesting things, though, is that when something that’s not so common comes to public attention, people have questions. Sometimes, they even get answered. Check it out…

All right, so for this one, we’re checking in with TikTok user @merdurh and relaying a recent discussion she had with her followers on the social media platform when they found out about her pieced eyelid.

And just to be clear, when we say pierced eyelid, we are talking about the eyelid itself.

Now, if you’re anything like us, you might immediately suspect that having a foreign object in the flap of skin that closes over your eye might be a bit of a pain in the arse. Apparently, though, it’s not. Yeah, nah, @merdurh reckons that’s because it’s nestled ‘on the little indent in the corner of her eyelid.’

Anyway, the discussion came about after one of her followers noticed the piercing and asked her, ‘is your eyelid pierced?’ Naturally, @merdurh was like, ‘yeah, bro!’ She tugged on the piercing and showed the piece off.

She then explained her logic for getting it in the first place. “I was 21 and wanted to do a body modification as a form of self-expression and I hadn’t seen this on anybody else, so it felt unique and, like, my own – that’s why I got it done. I think it’s the second least common piercing, or something like that.”

She continued by saying, “For everyone asking how I change it… This is a hinge ring, so it closes and snaps shut like so. It is a pain in the butt to change, I will admit that. I approached it how I think most people approach their tattoos – is that they want something that feels like their own that’s unique to them, and that’s why I did it.”

The tiktokker also reckons that no optometrist has ever had a problem with it. She says, “The cool thing about your eyes is that you have this naturally occurring saline that you produce for your eyes, and it keeps things pretty clean. And then, in that, you also have these enzymes that break down pathogens, and they’re called lysozymes, so that also makes it pretty clean.”

So, there you go kids, go and get your eyelids pierced. Your folks’ll love it.

Final thought: As we said, we’re always genuinely interested in piercings, but we’re not sure you ever need to justify your body modification. Like, deadset, it doesn’t even have to be unique. If you want a bog-standard cliché-as-f**k modification because you like it, just get it. You do you. You’re the only one who has to dig it. Yeah, nah, you do you!

Just in case you missed it, here’s one of Ozzy’s latest commentary videos…Queen’s Funeral