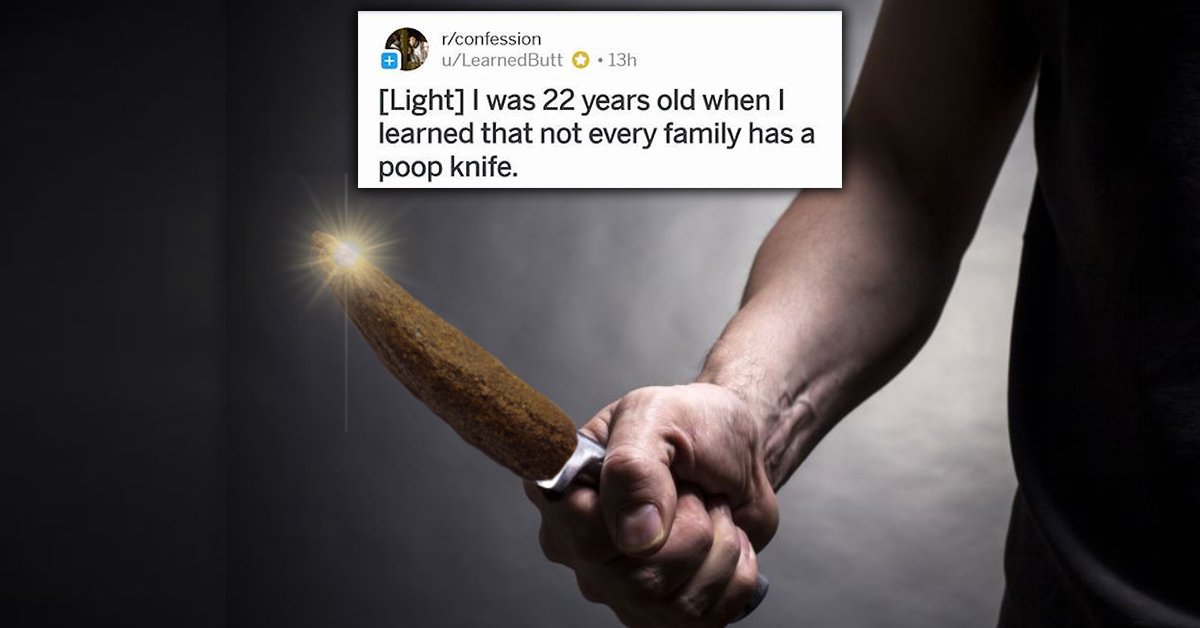 Some people run some pretty funky family practices – and never know quite how f***ed up they are until they grow up and enter the real world where strangers mock and revile them for their bizarre differences.  It’s with that in mind, I give you today’s tale…

Now, whether this tale of the poop-knife is true or is in fact a load of old sh**, I don’t know.  What I will say is that it does remind me of an old poster that used to adorn the dunny walls of a radio station I used to work at.

Look, I’m not going to say much more here, let’s just get into it and see what this is all about… 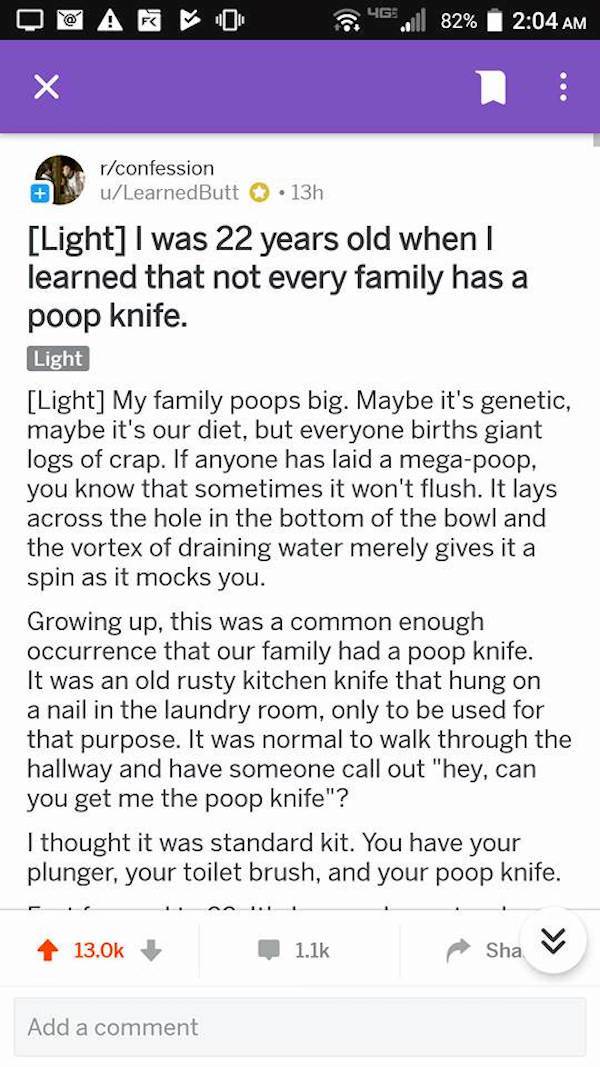 Nope. Not EVERY family. Credit: Reddit/LearnedButt

OK, so first of all, the poster on the wall I mentioned was called the sh**-list.  It had descriptions of all the different kinds of poo.  One of the entries read, ‘KING KONG POO: This one is so big that you know it won’t go down the toilet unless you break it into smaller chunks. A wire coat hanger works well. This kind of poo usually happens at someone else’s house.’

I don’t know where that came from, but it was always interesting to try and figure out what category of number 2 you were busting on work hours.

Anyway, here’s the next bit of the story. 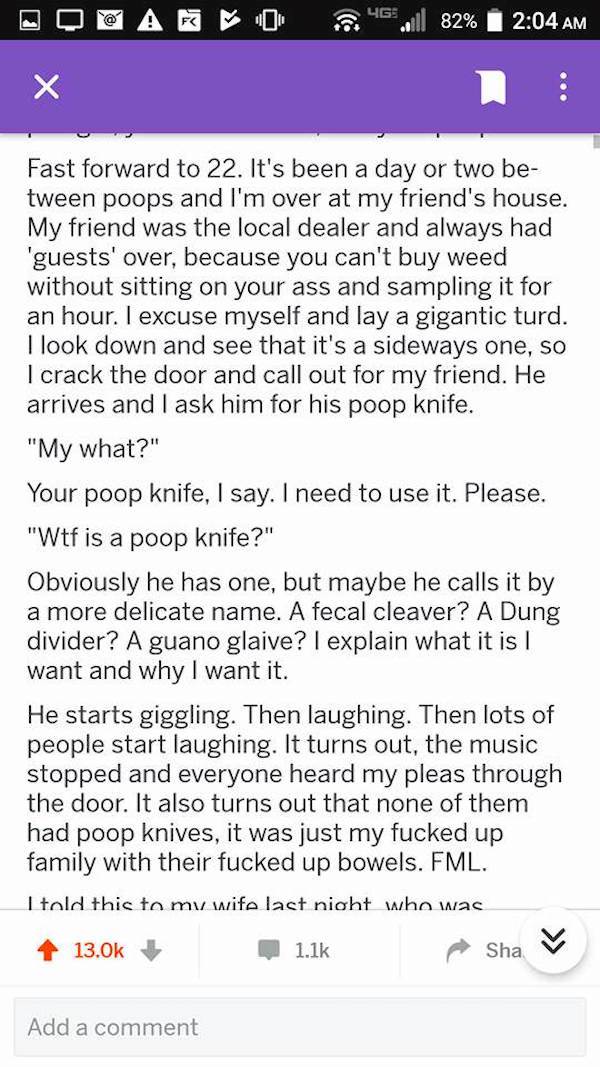 Perhaps you could try pinching it off halfway through? Credit: Reddit/LearnedButt

At this point, all I can say is thank f*** the poop-knife is not about scraping your bunghole clean.  That’d just be…primitive.  But, sure, if your turds are that big they just won’t flush I guess you’ve got to do something about it and a handy old knife would do the job nicely.

You just don’t want to confuse the remnants for nutella.  That wouldn’t be good. 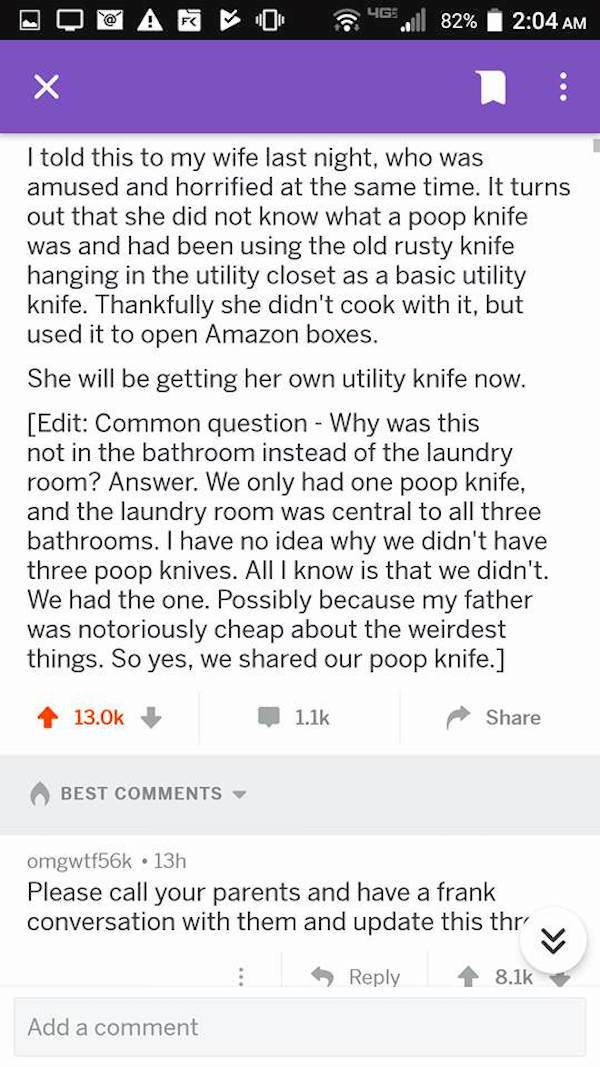 So the whole time he was calling out, ‘honey, bring me the poop-knife,’ it didn’t register for her. OK. Credit: Reddit/LearnedButt

So there you have it.  The poop-knife.  I don’t know if it’s a true story, but I really do hope so.  I’d also like to know whether old mate was actually able to unblock his mate’s dunny or whether his gigantic turd is still there to this day.

Let us know on the Facebook what you’ve come to realise is weird bathroom practice as you’ve grown up.