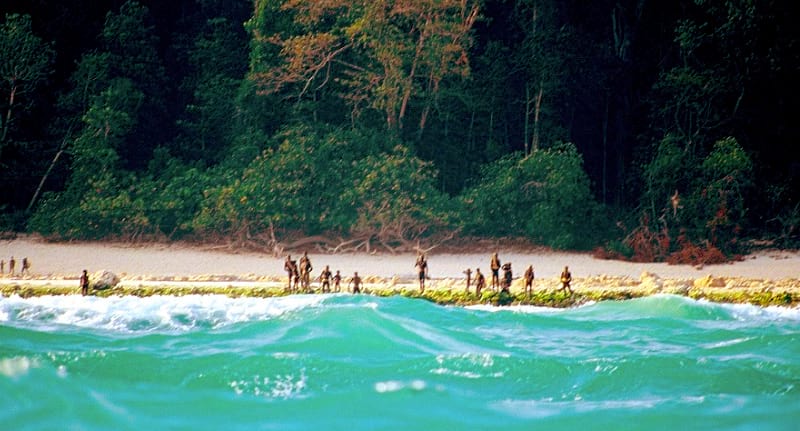 An indigenous tribe in the Indian Ocean is thought to be the only untouched pre-Neolithic tribe to remain anywhere on earth. They have lived on North Sentinel Island in the Bay of Bengal for an estimated 60,000 years and attack anyone who tries to contact them.

In 2006, two illegal fisherman were killed by the tribe when they accidentally drifted to close to their shores while crabbing, these guys don’t play! They fire arrows and stones at anyone trying to reach them, even airplanes. After the families of the missing fishermen raised the alarm, a coastguard helicopter went to try and retrieve the bodies, but was met with the customary barrage of arrows.

These guys are so hostile the Indian Government has established a ban for anyone wanting to visit them. They are thought to be direct descendants from the first humans who emerged from Africa, who have lived on an island around the size of Manhattan. These fellahs have survived for so long and they have never known the outside world. They would have their own rituals, spirituality, language and customs uninfluenced by any modern society. A government group tried to contact them in 1967 by leaving them gifts and trying to signal them, but they would “turn their backs to us and sit on their haunches as if to defecate.” I don’t speak any Sentinelese but I’m pretty sure that means can you please f*ck off home! Since then illegal fisherman have continued to target the area, but are warned that these people are likely to have no immunity to common diseases such as flu and measles. One diseased angry fisherman could wipe out a 60,000 year old tribe.

I doubt that anyone in the tribe knows this, but it’s probably a good thing they are so hostile towards outsiders. Nothing worse than inviting some stranger in for a beer and them accidentally wiping out everyone you have ever known. That and place looks like a tropical paradise, and we humans tend to have history of f*cking up our habitat.