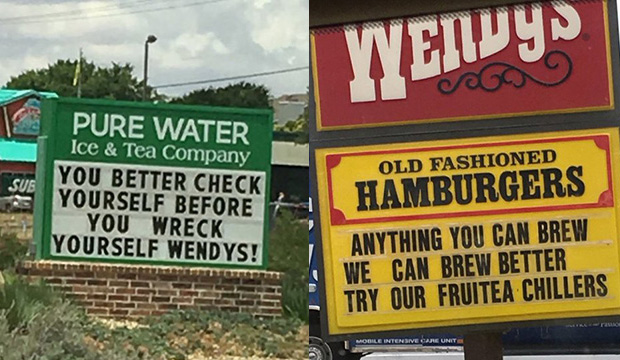 Two fast food joints in the US have started an all-out sign war after one of them offered free drinks to the football coach at a local University, Texas Tech. College football is big business in the US, with games even being televised, so even the coaches become celebrities if only in their local towns.

The local Pure Water extended the offer to the coach, and when the neighbouring Wendy’s matched it, the game was on. Noticing Wendy’s had matched their offer, the Pure Water changed their sign to say “Hey Wendy’s That Sign Looks Familiar.” The Wendy’s responded by changing their sign to “Something else is familiar, our fresh never frozen beef.” Pure responded – if Wendy’s wanted beef, they were going to get it. Wendy’s then took a stab at Pure Water’s brewing skills. For a company who’s main business is selling ice-tea, that’s a pretty big claim. Pure wasn’t going to take it though. And their response was swift. Wendy’s wasted no time with a retort, clearly marking their territory. Clearly Wendy’s thinks their neighbour’s product is so bad, it’s appropriate as a punishment for using their parking. Pure responded. Subway was staying out of it, as was Taco Bell, neither wanting to get caught in the crossfire. To anyone just driving by, they might be completely oblivious to the battle raging around them if they didn’t notice the Pure Water sign. Wendy’s in the US isn’t actually related to Wendy’s here in Oz, although it’d be easy to think so when practically all the fast-food joints in Australia are franchises of American brands. The whole ordeal has become known as the battle of Fourth and Frankford by locals. It’s currently still underway with Twitter user and Lubbock resident, Riley Lookingbill, giving updates.

Pure Water threw this one up today, still waiting on Wendy's response. This one is gold ??? pic.twitter.com/stvmq5cw1E

No news on negotiating a ceasefire, however casualties have been minimal. Currently, just one ginger with a bruised pride.