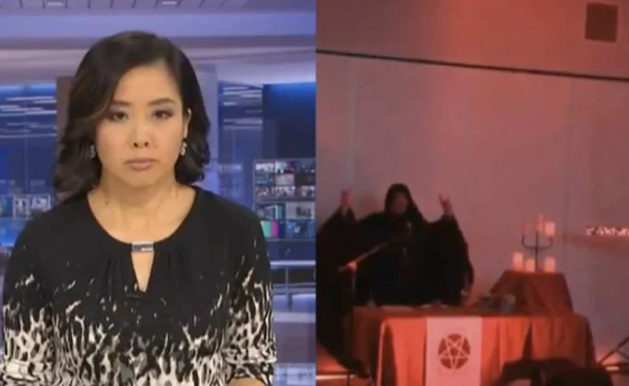 ABC accidentally cuts to a Satan worship gathering during the news

Here at Ozzy Man Reviews, we bloody love an innocent television f**k-up. Yeah, nah, there’s nothing better than the awkward silence that rests heavily on the screen when a news reporter has to keep their game-face on right after a colossal error. This is absolutely one of those moments! The ABC, Australia’s national broadcaster, was cutting to its next segment when someone cut to footage of a Satanic mass. Check it out…

All right, first up, it’s pretty important that we do a bit of due diligence here. We don’t really give a s**t who or what you worship, so long as you’re not hurting anyone, and despite the reputation movies and conservatives play up, the modern Satanic church isn’t hurting people.

ABC's satanic slip-up. What was going on here? @abcnews pic.twitter.com/D1dWfjOYhM

Yeah, nah, we’re not here to do your research for you, but the most popular version of it, is basically a socialist movement that aims to do good in the world and undo what they see as harm perpetrated by extreme religious movements.

Still, none of that makes this footage any less funny. Yeah, nah, right after ABC reporter Yvonne Yong presented a piece on the a new law designed to present harsher penalties down on those who harm police dogs, the channel cut to a clip of a satanic mass.

Clip is a replay of the ABC story on the 7.30 news last Thursday about Noosa Temple of Satan’s David V Goliath battle with the State Government over their right to provide Religious Instruction in state schools. As spokesperson for @psss_qld I was at the court hearing to watch.

And the timing was f**ken perfect. Those present in the clip were garbed in robes and the man leading the ceremonies announced “Hail Satan” with timing that was just a little too perfect.

The footage was brought to attention by Media Watch, a watchdog-style television program that highlights shenanigans and balls-ups in Australia’s media. Apparently, it comes from a Queensland-based wing of the Temple of Satan.

It appears the footage came from this Noosa Temple of Satan livestream (8.00 mark):https://t.co/f9wRNlz4YW

They’ve been in the media recently:https://t.co/LrH7HeKrlb

Final thought: Yeah, nah, we love this. We also reckon it had to be a set-up. After all, the timing was just a little too good. Anyway, let us know what you reckon about it in the Facebook comments.

This US sheila’s culture shock upon moving to Oz is f#@*en gold!

One of the big bloody joys of travelling the world is that it gives you a new perspective on your own neck of the woods. Yeah, nah, deadset. It lets you see how much we do differently here in Straya and helps you real...

One of the things we bloody love about the modern age is that we seem to be, slowly but surely, trying to move to a more gentle world. Don’t get us wrong, we’re not sure it’s all that effective at the moment, but it’s...

By now, the advances Boston Dynamics are making with their robots aren’t exactly news to most people. We all know that they’ve got the bloody things doing some pretty f**ken cool stuff, and every time they let us know...

We know we often sound like a broken f**ken record when we talk about the cool s**t people find on Google Earth, but we can’t help it. Yeah, nah, it’s not our fault. Deadset, people keep finding cool s**t, and we have...

Seeing as you’re already on the internet, we’re just going to assume you’ve seen things that could make a grown adult cringe. Yeah, nah, it’s all part and parcel of the gig. Sometimes, though, you just can’t help but ...