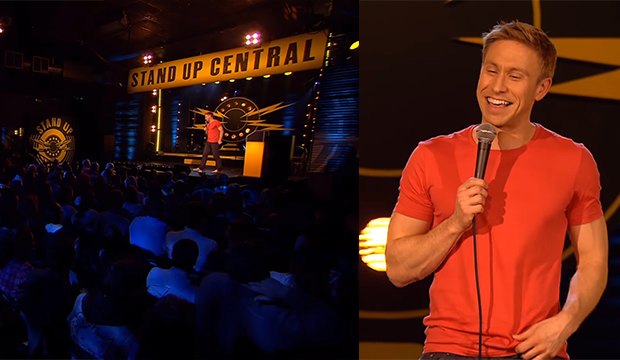 Russel Howard Makes “Disabled Joke” About Audience Member, Turns Out She Is Disabled

Ever made a joke at someone’s expense, only to realise that person is standing right behind you? Well British comedian Russel Howard knows how it feels do that in front an entire theatre of people, live on television. After making fun of an audience members comment, he makes a quick jibe about the next comment being from the first person’s carer, only to find out that the audience member is in fact disabled, and her carer is sitting right next to her.

The audience has a good laugh at Howard’s expense and Howard drops to ground in embarrassment, clearly understanding the insane chances of what just happened actually happening. In today’s P.C. culture, it’s easy for innocuous comments to get blown out of context, so a direct jibe at the expense of someone with a disability can be career ending for some. However, Howard handled himself well and it quickly became apparent that the joke was on him.

The audience member, Tia, and her carer took the joke in good humour, as did the audience, whilst Howard openly admitting “I feel like quite the arsehole.” Taking the piss out of people isn’t something that Howard is shy of and pointing out the stupidity of others gives him tonnes of comedic gold. With that said, Howard knows that some people simply shouldn’t be joked about.

Howard is best known for his appearances on British TV, including on Comedy Central UK’s Stand Up Central, and his own show, Russel Howard’s Good News, which is currently screening on ABC 2, Wednesday nights at 9:54 pm.

Russel Howard is currently on his “Round the World” Live Tour, reaching Australia on the 7th of July and performing in Melbourne, Brisbane, Adelaide, Perth, and Sydney.

Check out the video on the player below: