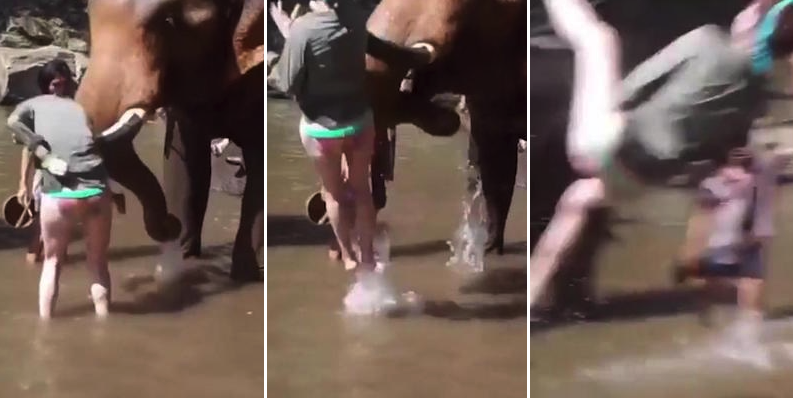 Furious Elephant Launches Tourist Into The Air With Its Tusks

Riding elephants is fucked; it may seem like a fun thing to do but those poor buggers are enduring a living hell for the sake of our amusement, so when footage emerges of an elephant getting its own back, one’s soul does a little air-punch.

In order to make these beasts rideable, they must be isolated from a very young age and ‘broken’ by their trainers (aka torturers). And to what end? To give tourists a fun experience, sitting on top of such a majestic animal? There are so many fun things to do in Thailand; lots of them involve ping pong balls and none of them involve enslaved elephants.

Some people don’t know any of this, however, and for them, a trip to the Land of Smiles wouldn’t be complete without a ride on one of these beautiful animals. Well, I’m happy to report, the elephants are fighting back, as can be seen in this clip. In it, American student Whitney Lavaux can be seen washing an elephant in a shallow river near Chang Mai when all of a sudden, the big fella loses it’s shit and flings her into the air with a flick of the head. Luckily, Whitney was unharmed and can be seen getting back to her feet at the end of the clip. What’s the deal with us humans, anyway? Why the fuck do we feel the need to ride every rideable animal on our planet? I bet people would try to ride fucking sharks if they could. This is yet another reason why the aliens are giving us a wide berth – they don’t want us to straddle them and start yelling ‘giddy up!’. Whitney Lavaux going for a ride.

Although this is shocking to watch, it serves as a timely reminder that these animals are wild at heart and deserve our utmost respect. Plus, I’m sure both Whitney and the elephant will never forget that what happened here!

I nearly made it to the end of this story without using an ‘elephants never forget’ joke but fell just short. Forgive me, dear readers.

Still, it could have been much worse – I was going to say something about Whitney not sticking to the tusk at hand. Considering that, you lot got off lightly…

WATCH WOMEN VS ELEPHANT AND OZZY MAN’S COVERAGE ON WHEN ANIMALS FIGHT BACK ON THE PLAYERS BELOW: