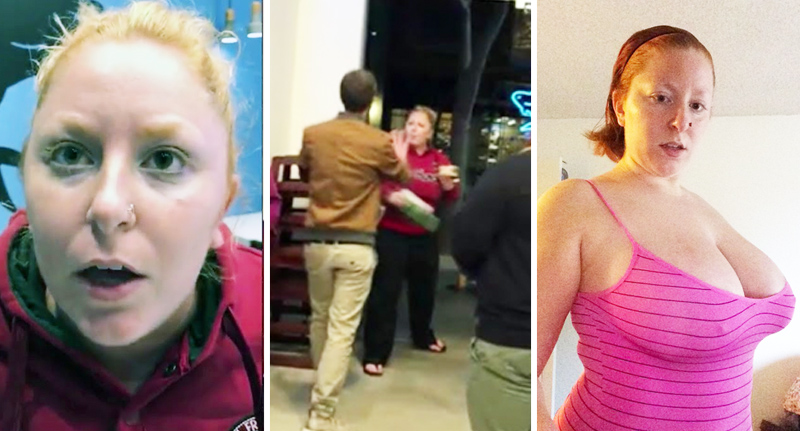 We covered a story a few days ago about a crazy woman going nuts in a restaurant over a couple kissing (public display of affection).

The woman went ballistic because the guy who was filming the video had his “arms around her from behind and maybe kissed her on the top of the head once or twice, but that was the extent of it”.

She called the woman a prostitute, a sl*t, a b*tch, and told her to leave. After being reminded she was being filmed, she said she will call the police because prostitution is illegal. It was a f*cken kiss!

And she wasn’t done there either. After getting in the guys face (the one who is filming, who did the kissing), he tells her to back up, and tells the dude working in the store to call the cops. The cranky sheila then claimed the two were having sex in the restaurant. After a few moments of stunned silence, she then claimed that she was being sexually harassed (anyone’s guess how). Of the original video, the man recording said: “We tried to stay as calm as possible. I was trying not to engage as I knew this lady was clearly nuts, but when she started calling my girlfriend a sl*t, whore, etc, and when she stepped closer to her, that’s when I started getting angry.

“In retrospect, I’m proud that we didn’t sink to her level or anything like that, but wish I would’ve said some more clever remarks.”

Well, there’s another twist in the tale. The so called “sl*t shamer” is allegedly a webcam girl. Of all possible occupations for a “sl*t shamer”, I think this one makes her actions at the restaurant seem most contradictory. A quick look at her Twitter reveals she has a bit of an obsession with Justin Bieber too. Did the guy in the restaurant look like JB? Was that why she flipped out? Stay tuned the internet folks, there might be some twists and turns left in this story yet.