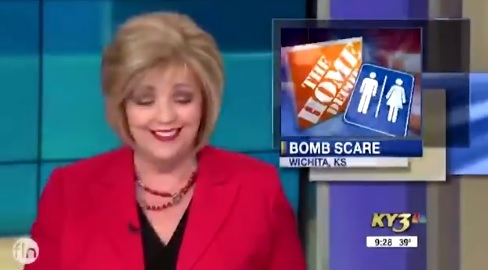 The English language is a pretty funny business. Deadset, it’s packed with nuance and double entendres and even a bit of innuendo. When you take all that and throw in a dash of slang, a pinch of colloquialism, and a sprinkle of common usage, you end up with something pretty special. The only downside is that if you’re missing a bit of context, things can be taken the wrong way. Yeah, nah, check out what happened when a bloke in the States threatened to drop bombs in a Home Depot toilet.

If you’re anything like us, you already know where this story’s heading, but it’s safe to say the sheila reading the news has had a bit of a stinker and her colleagues have set her up with a joke that’s going to leave her face flushed with embarrassment.

Was this recent? I didn’t realize people were still having fun….

Anyway, let’s cross over to her to see what she has to say:

“…Police responded to reports of a bomb threat at the store in Wichita. A customer alerted employees that a man inside the bathroom said there was a bomb in the building. Police were able to locate the man responsible for those comments, and that man told police he warned other customers to leave the restroom because he was ‘fixing to blow it up’, but he had no intention of causing a panic.”

KYTV’s Lisa Rose is one of the genuinely sweetest people I know here in Springfield, MO, and what makes this even funnier is that she hates off-color jokes. Thanks for the reminder of this gem. 🤣🤣🤣

It’s at this point that you start to hear the wheezing laughter coming from her co-reporters and she starts to realise that not all is at it seems.

“The man also told police that others in the room laughed, understanding his joke, which I’m just now getting…”

This is a bloody gold stitch-up. As far as we know, the story is actually real, and we certainly hope it is, but you’ve gotta love the way the reporter slowly realises that she’s getting dropped right in the s**t by her colleagues.

Final thought: If you’re anything like us, you probably love a bit of workplace banter. Let us know about your best stitch-ups from on the job-site. Load up the comments with your stories.