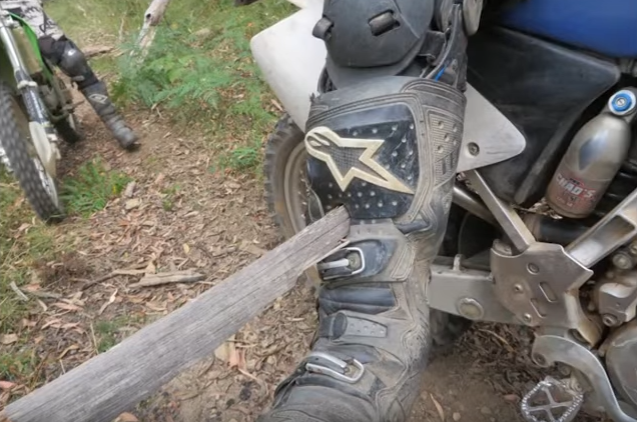 If you thought wearing full protective gear while riding a dirt bike meant you’d be safe, you’d be wrong. Well, these blokes found that out the hard way while bush bashing on some trails in Victoria, Australia. One of the boys, Dan, was out with his mates when he rode through what looked like a big enough gap. The gap was between two parts of a broken tree, and Dan thought he had enough room to slide between the break. Turns out, not enough room! He hits the tree on the right side of the gap, and from the way he stops, it looks like he hit something really hard. He stops and looks down and sees a f*cken spear coming out of his shin, through his boot! He bends over to yank it out but it’s firmly stuck. Mate, that thing is deep. And he hasn’t even flinched. Everyone gathers around to have a look, and no one really knows how deep it is (yet). The man isn’t screaming his head off, so everyone thinks that it’s probably pretty shallow. Turns out they were all wrong. After the spear is pulled out it is coated in blood, and it looks like it’s almost gone through the whole leg. They were 3 hours away from camp so they had to ride all the way back! Poor Dan.