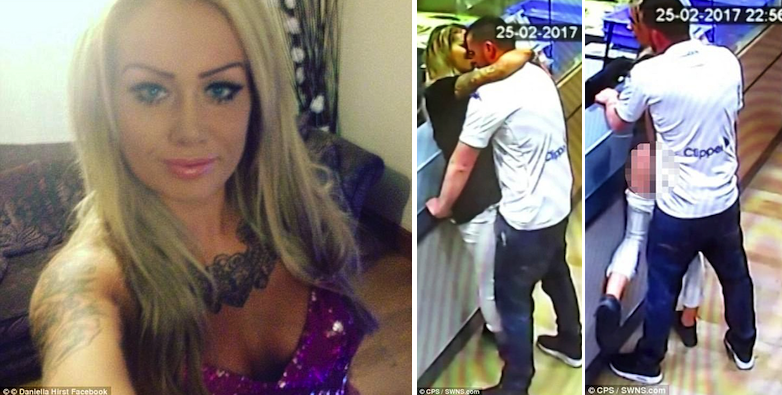 A Scarborough couple who had sex in Domino’s pizza joint are facing prison sentences after a video of them shagging was shown in court.

CCTV footage of Daniella Hirst and Craig Smith boning on a Domino’s counter while waiting for their pizza was shown at Scarborough Magistrates Court.

In the video, the exhibitionist couple can be seen placing their order before simulating sex with a yellow cleaning cone. This obviously got the pair going because, before long, Hirst gives Smith a blowie in the middle of the store.

The pair then have sex, leaning against the counter, while staff can be seen going about their work in the kitchen and delivery drivers come and go.

Hirst pleaded guilty to ‘committing an act outraging public decency by behaving in an indecent manner’ and described her behaviour as ‘horrendous’. She also told the court that she ‘cringed’ while viewing the CCTV footage during her police interview. The couple hail from East Yorkshire, England, and had been drinking and celebrating Smith’s birthday when they got the train to Scarborough. After that, sh*t seems to have gotten a bit out of hand.

Hirst’s lawyer attempted to have the CCTV footage thrown out but magistrates rejected the request.

In her defence, the lawyer said: “This case speaks for itself. Clearly, they were drunk and let their exuberant spirits get the better of them. There is nothing sinister in relation to the acts themselves, they are quite guarded. They have not been brazen in their actions…Miss Hirst’s dirty laundry has been aired in public.” Both Hirst and Smith are due to be sentenced on October 17 at Scarborough Magistrates Court.

Speaking after the video went viral earlier this year, Hirst said: “I’m very opened-minded about sex and public places – I love the thrill you may get caught. But obviously, I never thought we’d get caught like this and end up all over the internet!” I dunno about you, but I reckon jail sentences seems a tad bloody harsh! I’m sure we, as a society, could come up with a better form of punishment for these two. Chuck your suggestions in the comments section!

HERE’S THE VIDEO (FOR ‘RESEARCH’ PURPOSES ONLY):