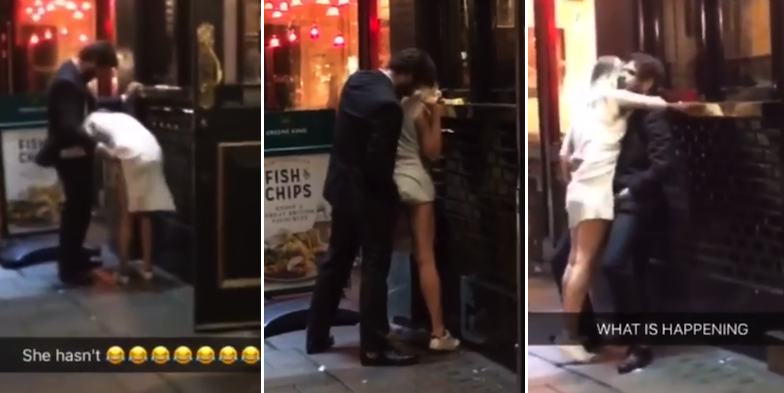 F*ck Ibiza, Sex Outside A London Pub Is Where It’s At Now

Holy moly! I’m down for some danger-sex but this takes the bloody biscuit!

But this isn’t your normal drunken snog-n-grope: the bloke is giving her a good ole finger bashing, right there on the pavement for all to see!

The dude gets his belt undone and continues to jab away with vigour while a female onlooker declares “Oh my God, this is amazing!” One quick-witted spectator decides to film the encounter for the prosperity of all mankind. The video cuts to the sheila going down on the fella, giving him a nosh in front of this small, stunned crowd.

The female onlooker continues with her running commentary, stating that “She’s sucking his co*k! She’s actually sucking his co*k!” before running in front of the camera and giving her double-thumbs-up seal of approval. Beats a Saturday night in, that’s for sure…

It hardly seems possible but this scene takes an even more surreal turn when a goddamn accordion player turns up and begins to drop a romantic sounding tune. It’s fair to say he’s just as distracted as everyone by the scene that these two drunken lovers are making, though.

The last shot shows the pair actually getting their fu*k on! It’s a fairly weird looking position that they’ve opted for: the lass is standing up while the guy bends his knees around her and she does the thrusting but, thinking about it, why the hell would this pair opt for a normal boning position? It’s clearly just not their style… Oh yes she has!

CHECK OUT THIS BIZARRE, PUBLIC SHAG ON THE PLAYER BELOW: