Footage of a group of chimpanzees torturing and eating one of their own is currently going viral due to its graphic content and the fact that we’re all a bit fucked, but the story of Foudouko the chimp’s grisly demise needs to be read to be believed. This is some Game of Thrones shit, right here…

Thirteen years ago, a teenage Foudouko ruled a community of chimps in Senegal as their alpha male. Second in charge was the beta of the group, a fella named Mamadou. The community lived in relative harmony for three years but then an accident to Mamadou changed all that.

He was left injured and, as a result, his position within the group plummeted. With his closest ally now at the bottom of the social ladder, an alliance of young males banded together and led a coup against Foudouko.

Banished from the community he once reigned over, Foudouko lived in exile for the next few years but his old buddy Mamadou eventually managed to regain his position as the group’s beta male, this time to his brother David.

That gave Foudouko a chance to get back in with his old gang but the wily veteran still had designs on the top spot. Unfortunately for him, an alliance of five young males were also trying to become the new leader so they banded together and chased Foudouko off (again).

However, no matter how many times they chased him away, the ex-leader returned time and again, mainly due to the fact that it was virtually impossible to get any pussy on his own. This pissed the youngins off to no end so one day they made their move and put a savage beating on Foudouko.

The ex-alpha was found dead, bleeding from wounds across his entire body. His bones were broken, he had deep cuts and there were abrasions on his arms that appeared to be the result of others holding him down during the attack. 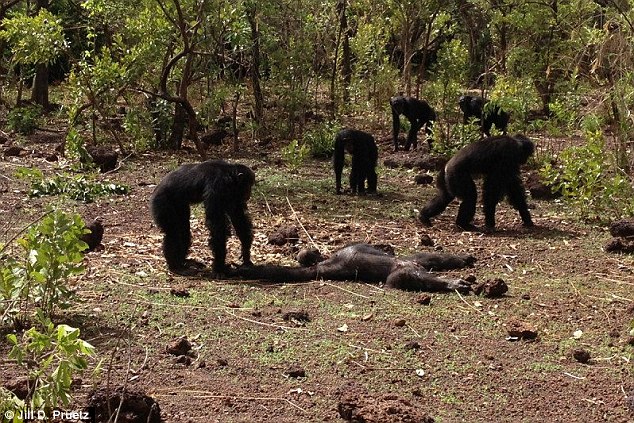 Even after his death, members of the group continued to beat him with sticks, stones, and fists while some even ate bits of him. Oh, and his goddamn anus was ripped too!

“[There were] attacks by multiple chimpanzees on his dead body, most frequently by a young adult male and an older female,” authors wrote in a paper for the International Journal of Primatology.

Who was this mysterious older female that was so into eating Foudouko, you ask? Why it was none other than Mamadou and David’s goddamn mother! She truly is the Cersei Lannister of this group.

“The female that cannibalized the body the most, she’s the mother of the top two high-ranking males. Her sons were the only ones that really didn’t attack the body aggressively,” said Professor Pruetz, lead author of the study and director of the Fongoli Savanna Chimpanzee Project. “It was striking.”

And in one final twist, the same group of young chimps that initiated Foudouko’s end turned on Mamadou, removing him from his beta position and then exiling him from the community altogether. He now wanders the bush in solitude like his old friend used to.

Along with the bonobo, chimpanzee’s are our closest living relatives, which kind of explains why some of their behaviour is so fucked up. Sure, they’ve got a long way to go before they can challenge us for the title of Craziest Species In The World but a few more cases like this and we might have some competition on our hands!

WATCH THE GRUESOME FOOTAGE ON THE PLAYER BELOW: