Boss of the year is given 8 hours to fire his entire staff, decides to help them instead

By this stage, it’s pretty safe to assume that everyone reading this has had a sh**ty boss at one stage or another. Those b**tards are bloody ubiquitous. It doesn’t matter whether you work in retail, in trade, or in a professional industry, the fact that some people become complete c**ts when they’re given a little bit of authority is par for the course. Fortunately, it sometimes goes the other way, and bosses with a bit of compassion and a bit of human decency get to manage operations. Here’s a great story about one of those bosses.

Like so much internet gold, this story comes straight from the pages of Reddit. In a thread created for people to share their best ever job-quitting stories, one bloke flipped the script. This guy, shortadamlewis, was given a task that would make some of the bosses I know crack a raging boner. He had to fire EVERYONE in the next eight hours.

“I had to lay off my entire staff (and myself) with 8 hours’ notice.

I was the contract project manager on a government project (office type work). At our periodic review on a Thursday, the government announced they would not be renewing our contract and our last day was Friday (the next day).”

Bloody hell. While it might sound like a dream come true for someone without a shred of empathy, the reality is you might just be telling people they’re not paying their rent or eating dinner for the next week. F**k that.

Have a look at how this legend handled it, though.

“I brought everyone into the conference room first thing the next day, let everyone know that we were all out of a job and that today was everyone’s last day. I had everyone email me their resumes, and we went over everyone’s on the conference room projector and updated them over the course of the day. I then printed out “reference” sheets for everyone, and we all spent the remainder of the day writing letters of recommendation for each other.”

Then, to top it all off, have a look at what he did next:

“I ordered everyone pizza, and bought everyone a round of drinks at the bar next door. Most folks had jobs by the end of the next week.”

That, right there, is the mark of a top f**ken bloke. 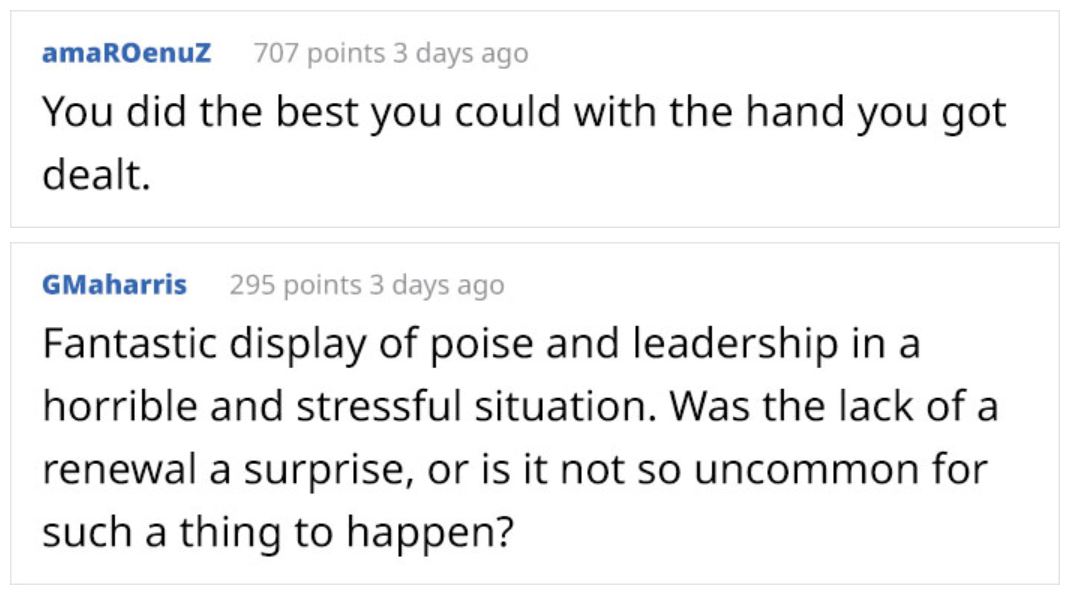 Needless to say, people thought this bloke was a champ! Credit: Reddit

Final thought: Bloody hell! Talk about making the best of a bad situation. Plenty of bosses would be thinking only about themselves and would quite happily shunt the ‘peons’ out the front door and blame them for the whole thing. Not this one, though. F**ken good s**t, bloke. G**d s**t.