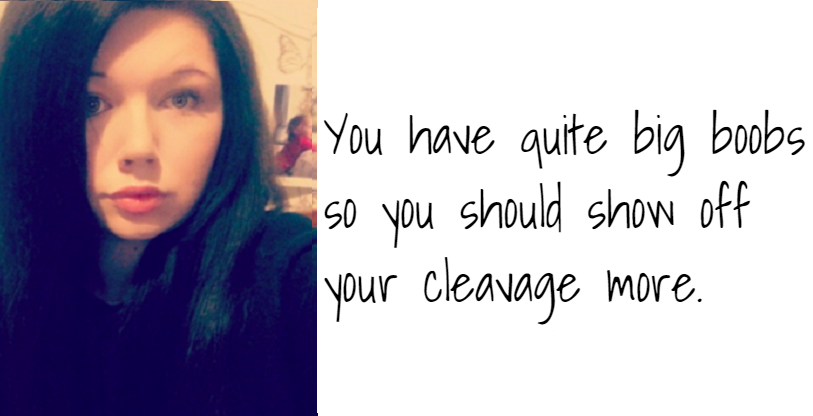 Mate, you don’t need to be single to know the dating world can be an absolute cesspool, full to the brim with less than desirable options. Some of the s**t that people have to go through to find a decent human being is bad enough, let alone striking it lucky and finding a perfect match.

Kimberly Latham- Hawkesford aged 24 from Morecambe in the UK, went on a date with a bloke recently and got more than a meal and a pint. Unbeknownst to Kimmy, she went on a date with a f**ken expert in all things dating and what she should be doing in order to be more successful in the dating world.

Kimmy being the class act that she is, hasn’t given out this wankers name, so for the purpose of this story we shall name this bloke, Richard. Knowin’ yous will give him the appropriate nickname.

Richard sent Kimmy a message a few months after their only date, and it starts off pleasant enough…

So listen up kiddies, Richard has some advice for young Kimmy, but we could all learn a lesson or two from his insightful views:

“If you lost some weight you would look incredible. Maybe a stone or so.

“You are very pale. I know you aren’t a fan of the sun but a bit of fake tan wouldn’t hurt.

“You have quite big boobs so you should show off your cleavage more.

“I think you need to wear clothes that suit your figure and maybe update your style slightly. Just so I’m not embarrassed to be seen with you.”

From these first few points it’s clear to me that Richard must have a mug & a rig like one of the Hemsworth brothers! Lucky bastard.

Not only is Richard a f**ken expert about cleavage, weight and female clothing, he also seems to know a bit about make-up, lip fillers and fake hair… Someone call Ru Paul and get this pr**k a job!

“You need to dye your hair a normal colour and add extensions. Longer hair is much more attractive.

“You need to look more natural, stop wearing make up. Just make yourself look decent but don’t overkill it.

“Your lips have gone down so you should think of getting more filler. I know you said you regretted it but filler would make you sexier.”

Someone as clever as Richard knows that a woman’s gotta feel beautiful on the inside too, so he imparts these wisdom nuggets to boost Kimmy up and have her feeling on top of the bloody world.

“You need so much more confidence, confidence is sexy!

“The fact you take things slow makes you look like a prude. I didn’t get a kiss which messed with my ego. Be more sensitive to others’ feelings.

“When we got food, I know you got a salad but having full fat coke is more calories you don’t need.”

Just a thought, maybe Kimmy didn’t give him a peck on the cheek because she is a prude…? Nothin’ wrong with that!

But I’m more inclined to think she didn’t pash him because Richard is a complete and utter f**kwit, but that’s just speculation on my part.

Now that Richard has completed his assessment of Kimmy’s physical and emotional requirements, he moves onto relationship advice. He’s f**ken thorough, I’ll give him that!

“You need to keep your past to a minimum. I don’t care about it and what you went through.

“Get a sense of humour, you didn’t laugh at a single one of my jokes.

“You just seemed a bit stuck up. Sort your personality out.

“You made me feel shit when you offered to pay. It’s like you thought I didn’t have enough money after telling you how much is in my account.

“You didn’t compliment me once.”

Its only fair that after Richard’s onslaught, Kimmy should have her say, but it’s not what you might expect.

“At first I was absolutely mortified and it killed my confidence, but the more I read it the funnier it became. I couldn’t understand how a guy could say such things to a woman.”

“My only tip for him is to respect women as his behaviour is disgusting.”

“If you take these on board I might consider another date. I will give you a month and get back in touch to see if this made a difference. Good day to you Kimberly.”

Yeah, so Kim, if you work through this to-do list, you might just get another chance at spending some more time with Richard, and you can teach him how to spell your f**cken right. You are a lucky devil Kim!

Final Thought: Kimmy is a class act. If this was me, fair dinkum I would be shoutin’ his name from the roof tops and burnin’ that pig down in a social media s**t storm…. BUT, I’m petty AF haha. It’s just horrifying to think these types of knobs walk among us without some sort of warning sign. If you’re in the dating scene, stay vigilant and stay strong. Hopefully the awesome blokes and sheila’s out way the number of dips**ts out there.