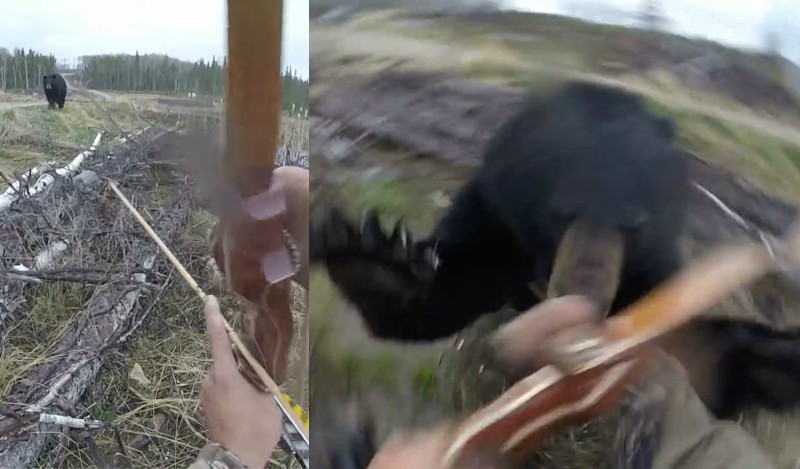 The Heart Stopping Moment A Black Bear Attacks A Hunter

One Canadian man has had a brush with death after narrowly escaping the clutches of a black bear while he was out hunting in his native province of Ontario, Canada.

Richard Wesley was on a spring hunt when he crossed paths with a black bear. He tried to stay calm not to disturb the bear as he waited for it to move on but the bear had other ideas. As an experienced hunter, Wesley knew that black bears will often charge and then pull out at the last second in order to test the resolve of their adversary, so he stood his ground and made a bunch of loud noises in an attempt to scare it off. Unfortunately for Wesley, this bear was in no mood to back down and proceeded to leap at him. Black bears can easily outrun humans and can even climb trees so the startled hunter was forced to do the unthinkable and fight a bear with his goddamn hands! “I should have shot a long time ago,” Wesley said after the attack. He actually did attempt to get a shot off with his bow but makes an absolute hash of it.

He subsequently uploaded the video to YouTube with the following message:

“I am so happy after this confrontation with a black bear during our spring hunt. No wounds except a bruised elbow and ego where the bear threw me down. Genuinely happy that this was a non-fatal or tragic outcome. Proving that the black bear is a wild and unpredictable animal. Again so happy with the outcome.” Fatalities from bear attacks are actually extremely rare; in the 2000’s, there was a total of 27 fatalities caused by wild bears in North America, meaning that you are much more likely to be killed by dogs or even lightening.

Still, statistics like that mean fu*k all when you’re face to face with a black bear and I’m sure Wesley counts himself extremely lucky not to have his name added to that list of bear fatalities.

WATCH MAN VS BEAR ON THE PLAYER BELOW: