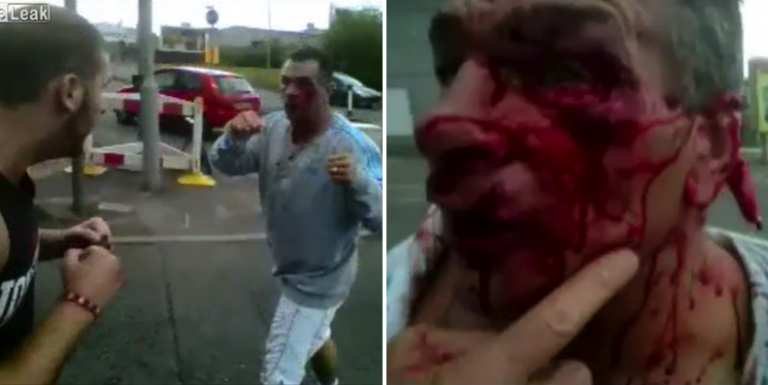 In this video, notorious Irish Traveller and highly recognised bare-knuckle boxer Patrick ‘Paddy’ Doherty is involved in a ferocious street brawl with his cousin Johnny Joyce, who is about half his age.

The fight, which took place outside a PC World in Manchester, England, is already in full swing when the clip begins; Joyce went full Tyson and sunk his teeth into the 57-year-old Paddy, tearing off a large chunk of his ear, which would later have to be reattached by surgery. The fierce scrap, which held up rush hour traffic, was apparently sparked by an incident at the wake of a family funeral and was the culmination of a long-running feud between the two Gypsy families.

In the past, Paddy has claimed that the gypsy community rejected him over his celebrity status after he appeared on a number of TV shows and even won Celebrity Big Brother 8.

Joyce’s brother, Dougie, recorded the fight and is can be heard encouraging Johnny, saying; “Come on you dirty Doherty b*stard. Give it to him Johnny! Go on Johnny! Give it to the dirty tramp! Go on! Flatten that dirty tramp!”

In the aftermath of the bloody brawl, Paddy’s face was torn to ribbons and part of his ear can be seen dangling. Joyce received a 15-month jail sentence due to the fact that he has an extensive criminal history. For his part, Paddy copped a one-year suspended sentence, while Dougie was given 150 hours community service and a fine. In the aftermath of the verdict, the judge made the following statement:

“Whatever the right and wrong of this feud I have to pass sentence regardless of how this incident started. I am prepared to accept that Paddy Doherty may have made the first move but what happened thereafter was that the wrongdoing was on the side of Johnny Joyce. Traffic was held up and members of the public were frightened and Doherty received the worst injuries, he was bleeding from his face and his ear was badly bitten. It’s preposterous to say that this action resulted from self-defence. Johnny Joyce has the worst record for violence and furthermore, the probation officer recommends a custodial sentence with Johnny Joyce having made it quite clear he wasn’t prepared to consider unpaid work.”