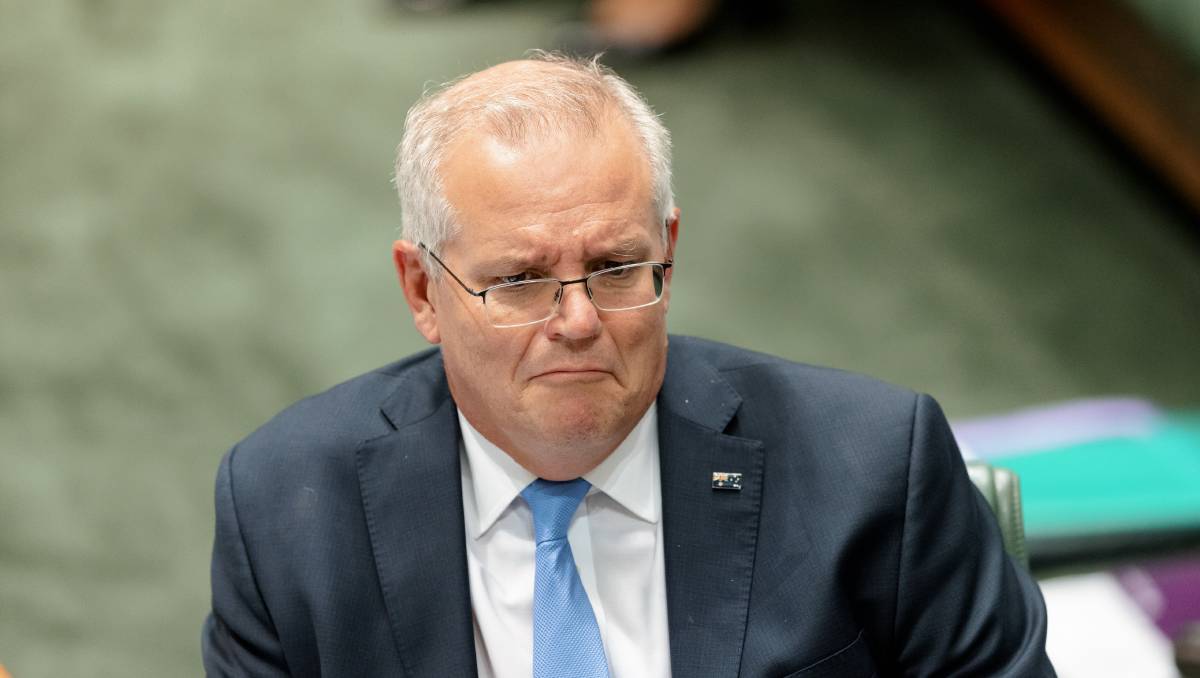 There’s no beating around the bush here, when it comes to the treatment of women in this country, Scomo and Australia’s Government of the Day have cocked it up time and time again. Yeah, nah, this lot really seem to struggle with taking women seriously, with treating them respectfully, and with not operating like a ‘toxic boy’s club’. So, basically, no one was surprised when the Women’s Network logo was revealed and it looked like a dick and balls.

To be fair, we know some of this is coming across as a bit harsh, and we do like to give the benefit of the doubt, but not only did this thing look like a dick and balls, it was the colour of a bloody emoji eggplant. It’s so ostentatiously supposed to be a cock, that you just know someone deliberately made it to f**k with Scomo.

Hahaha fuck the government’s dick’n’balls logo for the Womens Network would’ve been rejected in the writers room of any political satire show for being too ridiculous pic.twitter.com/xOAYJ6cn33

Naturally, the thing went viral pretty quickly, and Scomo, who frequently trends on Twitter under #dickhead and is possibly most famous for s**tting himself in Engadine Maccas, has come under fire again. For obvious reasons.

The Simpsons against the Liberals

Scott Morrison’s own department of Prime Minister and Cabinet for the logo for its “Women’s Network”…
Credit: Dan pic.twitter.com/Xw3t6LiwA4

As you can imagine, someone has finally seen sense and put the bloody thing away. The Department of the Prime Minister claimed the Prime Minister was not involved in making the logo, presumably because there wasn’t a photo opportunity for him, and have said they would remove the logo from their site.

Right @shaunmicallef or @markhumphries fess up. Which one of you won the contract to design the Prime Minister and Cabinet’s new “Women’s Network” logo?? pic.twitter.com/KDGEkyBsse

I thought this was satire, but it is either thoughtless or an insult. Public money was spent getting a graphic artist, choosing the designing, selecting colours, approving, printing and publishing this logo for the Prime Minister's and Cabinet's Women's Network.
Poor messaging. pic.twitter.com/jDYKNdMCkg

Naturally, women in Australian politics took the opportunity to flog the logo, highlighting that it was just another example of this government’s inability to see women as equal.

Scott's own government department, the Women's Network, has a logo that is…a little phallic. 🤯

Greens Senator Larissa Waters said, “Sure, it’s just a logo, but if you needed a visual representation of just how completely out of touch the PM is with Australian women you honestly couldn’t do any better.”

Please be advised that Women’s Network Australia has been around for 30+ years. This is our trade marked logo. We are in no way affiliated or associated with another #womensnetwork organisation and logo, the design of which has been subject to much comment. pic.twitter.com/6lx2EBxGRL

Final thought: Seriously, this whole thing had to be a stitch-up, right? Right? Surely, somewhere along the line, someone had to go, “Yeah, nah, that’s a dick and balls.” Anyway, have your say on the logo in the Facebook comments. See you there.

Optical illusion shows hidden number – and everyone is seeing it differently

Let’s not beat around the bush here. Even the haters who reckon these visual tricks are a load of bulls**t try them out. Yeah, nah, there’s no denying it. Everyone f**ken loves ‘em, and when a new one comes along, we ...

You all know that we bloody love to watch strangers bring back the biff. Don’t get us wrong, we don’t like to see straight-up assaults, but we do like to watch a consenting fracas. And to be fair, we never love it mor...