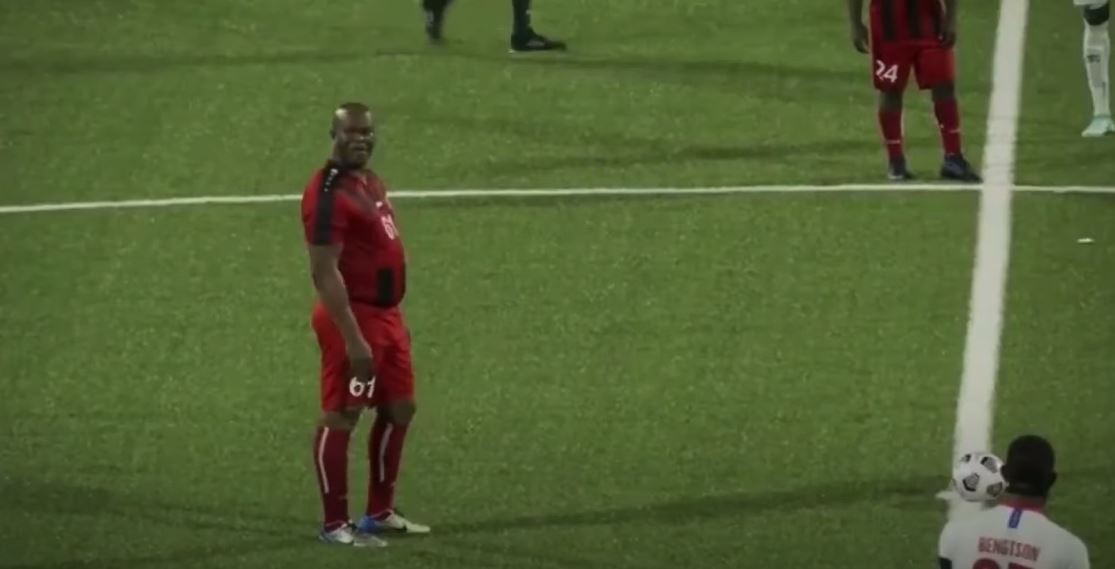 When you think about it, there are definite perks to being a corrupt politician in a small South American country. Don’t get us wrong, the cons definitely outweigh the pros, but when you know that it’s probably all gonna end in tears eventually, you’ve gotta live your best life while you can. And that’s exactly what wanted man Ronnie Brunswijk is doing. Deadset, this dodgy bugger is basically doing whatever he wants – including becoming the oldest professional football player to have played in a major contest…

Of course, before we go on, we’ve gotta give you a little context about Ronnie. The bloke is certainly not the kinda guy we should idolise. Hell no, he’s not a good person, but when you ignore the fact he’s a former bankrobber, gold baron, former rebel leader, an army sergeant during the Surinamese coup of 1980, and wanted man, you’ve gotta give credit where it’s due.

60 year-old Ronnie Brunswijk, the vice president of Suriname, picked himself to play for the club he owns, Inter Moengotapoe.

Brunswijk does know how to enjoy himself. In Surinam, he’s seen as a bit of a legend due to his penchant for hopping in a helicopter and dropping money into poor communities.

We’re talking about him today, though, due to his recent appearance in a viral video that shows him playing pro football in a Champions League match. That was able to happen because he owns Inter Moengotapoe and made himself captain for the game against Honduran team CD Olimpia.

Of course, he won’t be playing in the return leg. Honduras has an extradition treaty with France, and he’s wanted there for drug trafficking. Yeah, nah, as we said, despite the fact he seems fun, he’s not a top bloke.

CONCACAF has disqualified Suriname vice president Ronnie Brunswijk from participating in any related activities for three years after a video showed him allegedly passing out cash to Olimpia players and staff in the visitors changing room. https://t.co/8fqjx1Q6mv pic.twitter.com/V6bIlOICTW

Anyway, his antics in the game have seen him becoming a bit of a laughing stock on the internet. They’ve also raised the ire of CONCACAF (the Confederation of North, Central America and Caribbean Association Football), the football organisation responsible for the CONCACAF champions league.

A spokesperson said, “We are extremely concerned at the content of a video circulating on social media which raises potential integrity issues surrounding the CONCACAF League match between Inter Moengotapoe and CD Olimpia. The matter is being referred to the CONCACAF Disciplinary Committee who will commence a formal investigation and a further update will be provided when that process has concluded.”

Video was streamed tonight from Olimpia's locker room that appears to show Ronnie Brunswijk giving people in the locker room cash. He also leaves with an Olimpia shirt.pic.twitter.com/eQ1Vk928Bl

Final thought: Yeah, nah, this is certainly something different, and it just goes to show that if you’re gonna assume power somewhere, you may as well go mad with it. Anyway, let us know what you reckon about this in the comments section. See you there.