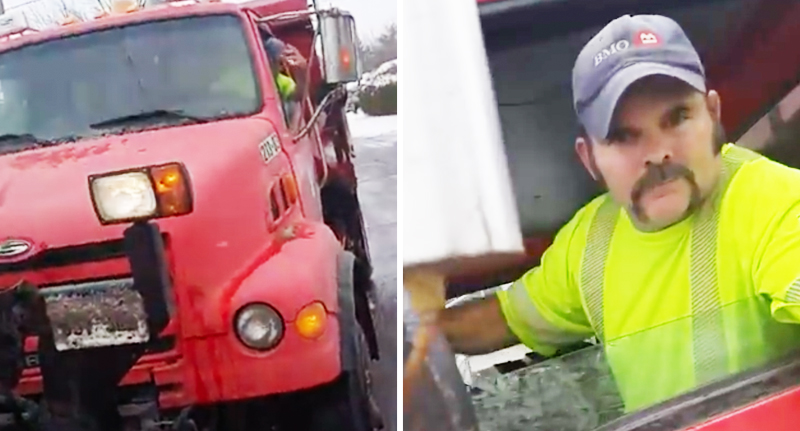 Being defiant comes with the territory of being a teenager. This universal rule has been well established throughout history and it doesn’t appear as though the trend will change anytime soon. For the most part they wind up defiant towards their parents or those with an authority position, but every once in a while you’ll come across a little sh*t like the one you’re about to see in the video below, and then what’ll you do?

This poor snow plow driver was trying to go about his day as though it were any other. He got up earlier in the morning than most, showered and got ready for the day. Maybe made some time to get that fresh pot of coffee boiling before walking out the door and driving through the snow, knowing he would be driving to remove it only a few hours later. The monotony of the day wasn’t broken by a welcomed sight either, it was broken by a snot nosed little brat who simply didn’t like having to listen to “the rules of the man.” The kid stood in front of the plow making the driver unable to continue along with his route. Not only did he just stand there, the entire time he was screaming how the driver was hitting him with the plow, whining like only a true spoiled child can.

Someone needs to teach that kid what’s worth being obstinate over and what’s not, otherwise this video will mark the beginning of a long line of beat downs in life that he’s really not ready for. Or don’t. I mean, one way is entertaining for the rest of us but I can’t secretly hope someone does terrible in life – I can only laugh at them when they do. Well, eventually the driver gets fed up with the shenanigans being pulled and calls the kid over to the window. Thinking he had the upper hand, the kid walks up and asks if the man would like to say anything into the camera, to which the driver responds with a well-deserved smack!

How does that song go again, actin’ like a b*tch get treated like a b*tch? I’m pretty sure that’s how it went.

See it on the player below: