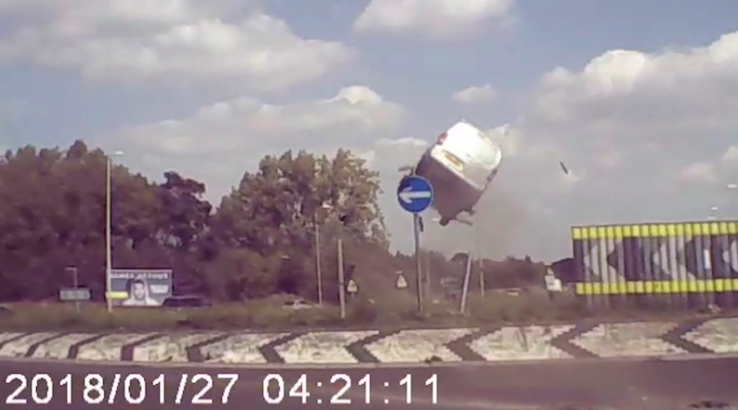 Bloke gets banned from driving after ‘Dukes of Hazzard’ style stunt

When I got my drivers license as a teen, all I wanted to do was load up my mates and hit the Macca’s Drive Thru. Most of them chipped in a bit of petrol money and the freedom was sweet. I never caused too much trouble on the roads, although I did back into me old mans ute one morning and copped the floggin’ of my life hahaha

But it was all pretty tame compared to this bloke, 18 year old Ryan Lamb who got some serious air courtesy of a big bloody roundabout.

It seriously looks like some sort of coordinated movie stunt, bringing the epic car chase to an end in some Hollywood flick.

Lamb is from Beck Row in Suffolk, and the footage was captured on A11 in Norfolk. And hows this cheeky bugger…? Despite the overwhelming VIDEO evidence, Lamb pleads not guilty. No harm in havin’ a crack I reckon ay.

“Your driving fell far below the expected standard of competent and careful driving.”

Geez, that’s puttin’ it a bit lightly isn’t it? Lamb lost his license for 12 months, he’s gotta do 80 hours of unpaid worked and copped a fine of 85 pound.

The bloke that captured the footage was 35-year-old Andy Daynes, he was riding his crotch rocket when the silver Citreon van flew passed him, and into the view of his camera that was mounted on his helmet.

“I was actually on my motorbike behind him so I saw it all. I pulled over along with some other drivers to see if he was OK.

“It is quite a bad roundabout, he just didn’t see what was coming because he was going so fast.

“The driver had a few cuts and bruises but the ambulance came straight away and took him to hospital. 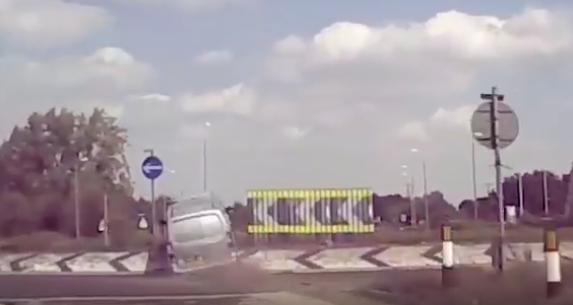 Well Andy, perhaps if the young knob was going a bit slower he would have seen the large roundabout and been able to stop before launching himself into the stratosphere ay?

We all do dumb crap when we’re young, no doubt. But this bloke had two other people in the car this day…. Probably showing off, and tryin’ to impress his mates with some Fast & the Furious style moves, before ending up in Destination F’d. Luckily they all survived, or it might’ve been a far more devastating outcome for young Lamb and the families involved.