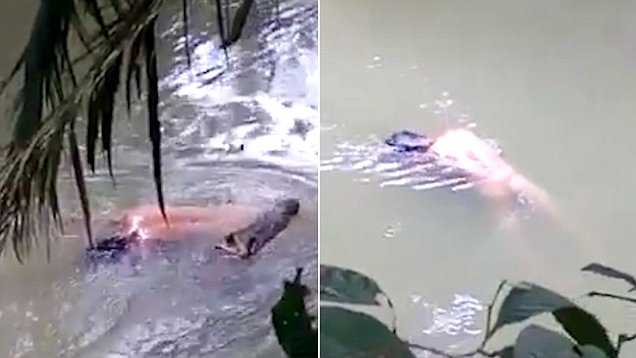 Saltwater crocs are amongst the scariest reptiles on the planet. Highly territorial, these beasts treat humans like prey and deliver a bite force of 3,700 pounds per square inch (psi) or 16,460 newtons. Let’s put that into perspective: if you have an old bootstrap of a steak you’re trying to get through, you’re delivering between 150-200 psi (890 newtons). It is estimated that their bites are as strong as that of a mighty T-Rex!

Salties are native to Indonesia and a poor bloke has lost his life after bathing in the wrong place at the wrong time. The incident occurred at around 6 pm in Berau, Indonesia, on Tuesday.

Locals are adamant that this is a fairly isolated incident and that part of the Lempake river is generally used for bathing. The man was, however, bathing fully naked when it is said that crocodiles are less likely to attack a clothed human. The man was snatched by a large crocodile and dragged away. The giant crocs that can grow up to 5m in length are known to grab, shake and drag their prey underwater to drown them. The man known as Syarifuddin didn’t stand a chance against the croc.

Locals and police searched the for the croc and Syarifuddin’s body, but it was feared he had been dragged underwater and left. Crocodiles have been known to hide their meals for later. The locals consulted a local witch doctor who specialises in crocodile spirituality. After weaving his black magic a remarkable thing happened. The next morning the crocodile returned Syarifuddin’s corpse to the banks of the village. Aside from injuries to his legs and fatal wounds to his rib cage and abdomen, the body was intact. The crocodile has not only not eaten the 41-year-old but had returned it to his family and friends. Villagers had seen 3 crocodiles escort the body back, describing the event as quite strange and abnormal.