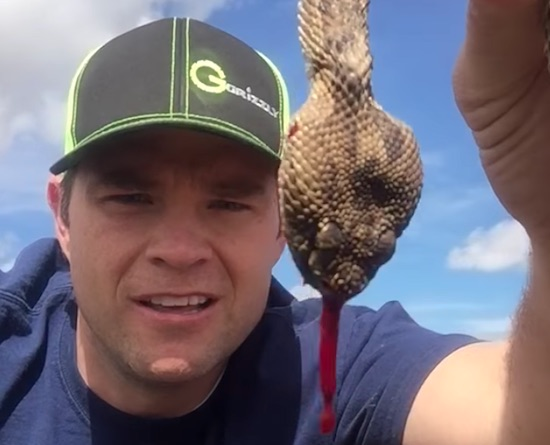 In Australia we have a f*ckload of animals that can kill you. So every little hint and tip to avoid death is obviously appreciated. Yes, yes, I know that there aren’t Rattlesnakes here in Australia and the best policy is to stay as far away as possible from deadly animals as the first line of defense, but it’s possible this tip might someday save your life. The lunatic in question is called Neal Hunt and he is out bushwalking (or walking some canyons as he calls it) when he spots a big ass rattlesnake. Rattlesnakes are not to be trifled with as an estimated 7,000 to 8,000 people per year receive venomous bites from these snakes in the United States, and about five of those people die. So Neal seems to have a good handle on what he is doing so he carefully goes over and picks it up, then shows it to the camera. The snake actually doesn’t look that pissed off. I would think it would start striking, or get agitated. But I guess when you are holding it by the tail there’s not much it can do. Anyway, he proceeds to whip the snake “like a towel”. This seems to instantly kill it, and you can see blood coming out of its mouth. A valid complaint of Neal’s tutorial is that he doesn’t actually show us how to pick up the f*cken thing! I can see him carefully stepping on something (or is he standing behind the snake or on it’s head??) but it’s hard to tell how he really picks it up without getting bitten.

Another valid complaint would be killing an innocent animal for the purposes of a tutorial (use a piece of rope next time mate) but at least now I know how to kill a rattlesnake if I’m already holding one and who knows, maybe this info might even save a life.