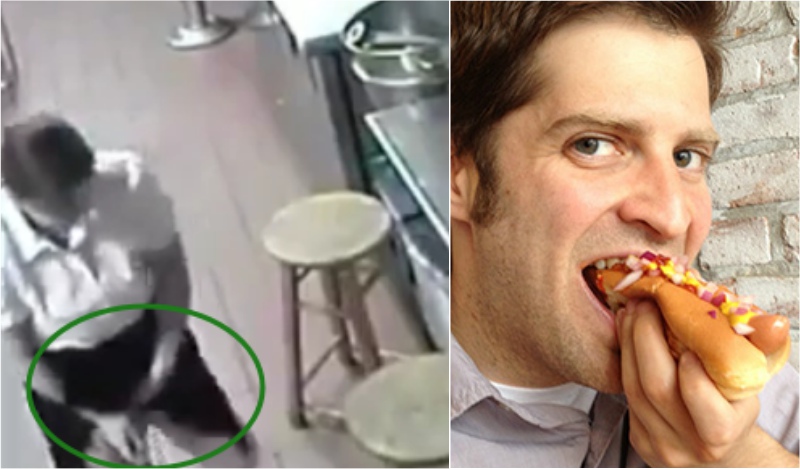 Okay we don’t know what the customer did to warrant this response. And we’re not asking.

The footage you’re about to see emerged online a few days ago, seemingly coming from an installed security camera in the food preparation area of a restaurant. Either the woman involved didn’t know the camera was there, or she didn’t care. It’s not uncommon for security footage to go unchecked unless something goes wrong for many businesses. Details on the video, like whether she lost her job, who uploaded it, or why she decided to do it in the first place, are scarce. However, it’s probably safe to say that she was having a pretty shitty day if her response to an asshole customer was a hotdog up the vag.

Although there are clearly other possibilities. Perhaps she’s got a boyfriend with some serious kink, or maybe her ex walked in with the girl he cheated on her with. We can’t help but wonder what made this young woman risk her job.

Maybe she got an STI from the hotdog’s intended consumer and she’s decided to return the favour with some extra flavour on their hotdog. If there’s anything worse than a case of the clap down stairs, it’s probably got to be the clap in your throat. Good thing it wasn’t a foot-long.

Some websites have reported that the footage originates from California, and that the woman is now under criminal investigation, but no official source for this claim could be found. Of course the case for “unsafe food practices” is pretty clear cut in this case.

Either way, the customer will definitely be wondering why the hot-dogs don’t quite taste like they used to.

We recommend you don’t eat as you watch this (unless you’re into that kind of thing).