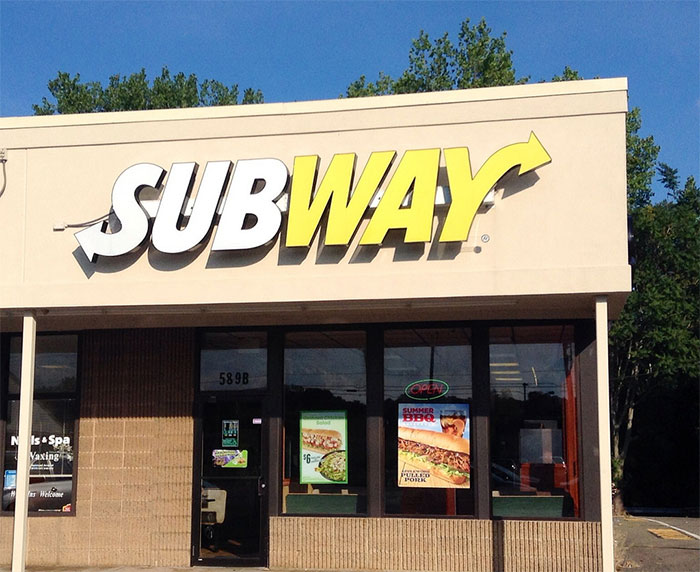 So, let’s talk about vegans for a minute. They might be whiny weirdos who don’t wanna do their bit in keeping the cattle population down, but whatever, each to their own. Having said that, you’ve gotta give ‘em credit for sticking to a lifestyle that must be f**ken difficult to sustain. Despite the pasty complexion, constant hunger pangs, and slow transformation into a skeleton, they still manage to persevere with their choice. That takes dedication and mental resilience. Unless of course, they accidentally eat something that’s not vegan… 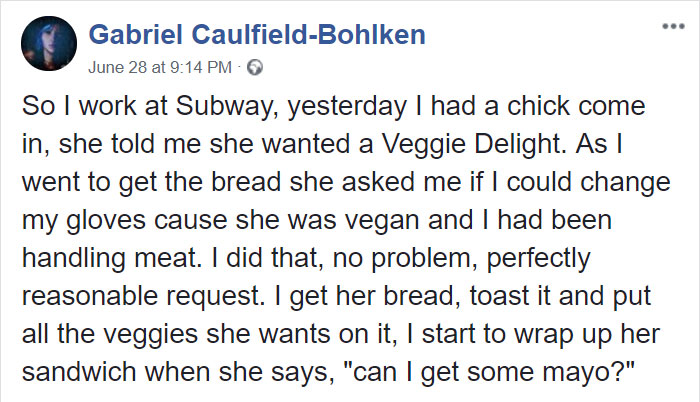 Which leads us to a funny story from a Subway worker in the states. A certain sandwich artist, who goes by the name of Gress66 on Reddit, shared a tale of sandwiches, salads, and submission to the fantastic flavour of mayonnaise.

Whilst he was working his shift, a vegan sheila came in to order her sandwich. She explained she was vegan and asked him to change his gloves because he’s been handling meat (snigger), thus proving once again the old joke works for a reason: “How do you know if someone’s a vegan? They’ll tell you.” Obviously, despite the jokes, it’s a fair call.

Once they were rocking some new gloves, she ordered a veggie delight. When it came time for sauces, she left poor old Gresh66 a bit confused. She asked for Mayonnaise. Certain she was pulling the chain, old Gresh asked her if she knew Mayonnaise had eggs in it?

And that, apparently, is when her drive broke and she realised that vegan just isn’t worth it. I mean it’s one thing to miss out on good sh*t like bacon and buffalo wings and T-bone steak and everything else made of meat that tastes f**ken amazing, but if you can’t even have mayonnaise then bloody hell, f**k the cows.

According to the story, her face dropped. She stood there shocked. Silent. You could have heard a pin drop. Right now, I’d like you to picture what’s going through her head at this time. Was it fluffy baby chicks before they were turned into nuggets? A thousand avian embryos being transformed into mayonnaise? Who knows. And then she speaks. “N-no it doesn’t. I get mayonnaise every time. Are you sure?”

Chick’s world was rocked. The sandwich artist behind the counter asked her again, and she gave into her desire for tasty, tasty murder. She took the mayonnaise and she feasted on that sandwich. Good lass!

Final thought: Call me evil, but I really hope she, like an alcoholic falling off the wagon, went on a bbq binge afterwards.