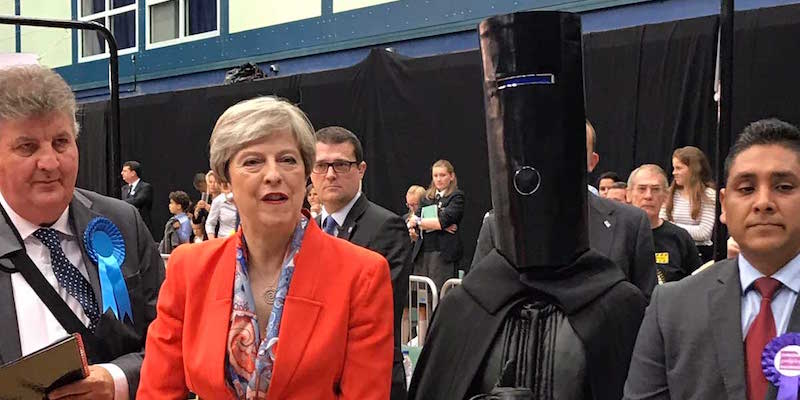 The UK elections are over and while Teresa May (aka ‘Diet Maggie Thatcher’) and her Conservative Party were, undoubtedly, the biggest losers on the day, there was, equally undoubtedly, one winner that stood head and shoulders above all else (and not just because of his outlandish outfit).

I’m talking about the one and only Lord Buckethead…

For the uninformed, Lord Buckethead is an intergalactic space lord and British political candidate who has stood in UK General Elections against three different Conservative Party leaders and Prime Ministers.

Representing a political party known as the Gremloids, LBH ran against Margaret Thatcher in 1987 and against John Major in 1992. In 2017, the lord ran against Theresa May and had his most successful campaign, to date. All hail our new overlord!

And after a quick read of his manifesto, it’s not hard to see why. Check out this bucket list…

-The abolition of the Lords (except me).

-No third runway to be built at Heathrow: where we’re going we don’t need runways.

-Nuclear weapons: A firm public commitment to build the £100bn renewal of the Trident weapons system, followed by an equally firm private commitment not to build it. They’re secret submarines, no one will ever know. It’s a win-win.

-Nationalisation of Adele: in order to maximise the efficient use of UK resources, the time is right for great British assets to be brought into public ownership for the common good.

-A moratorium until 2022 on whether Birmingham should be converted into a starbase.

-Legalisation of the hunting of fox-hunters.

-Katie Hopkins to be banished to the Phantom Zone.

When asked by radio interviewer Carol Off if this was the same individual that ran in the previous elections or “are you like Doctor Who, do you regenerate for each election?”, LBH replied: “I am Buckethead. We are Buckethead. We are legion. Does that answer your question?” Look at that line up!

A few days following the election, LBH made an appearance on the US late-night show Last Week Tonight with John Oliver and was put forward as an alternative to Theresa May to lead the United Kingdom into their upcoming Brexit negotiations. On a lot of issues, Buckethead actually makes more sense than those in the current government. Just listen to the lord speak about Brexit…

Perhaps LBH’s funniest speech of all is this little story about the British NHS (National Health Services). This is fu*king incredible…

Can we not just elect Lord Buckethead as president of the world? He would sort sh*t out in no time!