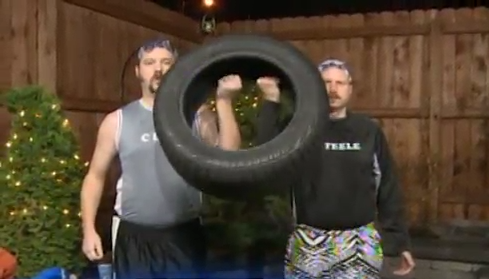 Two blokes have hilariously trolled three morning shows in America, with their antics about fitness and weight lifting. The duo, named Chop and Steele, have somehow managed to get onto national television and perform what only can be described as utterly absurd fitness antics. One station thought the pair were actually serious, until they turned up and performed a few of their favourite workout routines.

They included: both standing with tennis racquets and hitting the other person’s tennis racquet, karate chopping sticks, stepping on wicker baskets (wtf), throwing sticks at each other’s backs, and curling what looks like jugs of sewerage.

The threat of a court appearance hasn’t phased the comedy act who plan to fight it.

“I guess Gray Television didn’t have a sense of humor about this thing,” Prueher told The Mercury News.

“They’re trying to scare us, but we’re going to fight it because we’re well within our rights doing what we did.”

You only need to have a quick glance at them to notice that they have not worked out much in their lives. The pair had cited that they had done a tour and even been on Americas Got Talent. They had booked a staggering 7 morning TV shows and had done 3 shows before cancelling the rest of the appearances due to being ‘stressed out’.

If I came across these two fellas in the gym I’d be wary that they would be ego lifting and putting themselves in the hospital, and I’d be terrified if they were giving advice to anyone else! To those who know a joke when they see it – these guys are actually genuinely funny.

To those who don’t – these reputable young men are the future of fitness.

By Chuck Steinway 36 mins ago

As you’re no doubt aware, the US has a long tradition of flexing on Middle Eastern countries. We’re not gonna go into the details of who did what, who killed who, and the boofheaded nature of that, but we are gonna po...