I don’t know about you, but I’ve always thought the rule ‘hands and feet to yourself’ was a pretty good one. Generally speaking, unless someone wants you to share your extremities with them, you really shouldn’t – even if you really, really like them. So with news that Andy Dick, a once successful comedian infamous for his lewd behaviour, has been arrested on charges of sexual battery, some of his old misdemeanours are doing the round again.

Dick lives up to his name. Credit: ABC

In life, there’s really one bloke you don’t want to be: the guy who thinks it’s really funny to make chicks feel uncomfortable by making suggestive comments and groping them for no apparent reason. Hang on, let me digress for a minute. There are two blokes you don’t want to be: the fore-mentioned touchy-feely b*stard, and the silly f**ker who goes to the shopping centre without a shirt on. Don’t be that guy either. He’s a total Andy…

Anyway, back to the story. I don’t know if you remember Andy Dick, but I kinda didn’t until this video resurfaced. In the interest of giving him a chance, he looks like he might well be off his face in this video – and that could well explain his fascination with Ivanka Trump’s ‘shiny’ legs – but we have to be honest. That’s not an excuse for his sh*tty behaviour.

It’s pretty bloody awkward and creepy to watch him trying it on. He’s making a few comments and just repeatedly copping a feel of Ivanka’s legs. It’s a bit f**ked. That was in 2007, but on top of that, he’s also been pictured copping a feel of Pamela Anderson’s tits in her 2005 Comedy Central Roast.

Get out of here, Dickhead. Credit: ABC

The dirty b*stard pretended to be a plastic surgeon for this particular dodgy moment. He grabbed her baps and told the audience how ‘well engineered they were.’ When Courtney Love, who was also on the show, spoke out, Dick told her that Anderson couldn’t feel any of it. He then tried to grope Courtney Love but copped only a slap for his troubles.

Right now, he’s up on charges of sexual battery after allegedly grabbing a random woman’s arse and making lewd comments as she walked down the street. 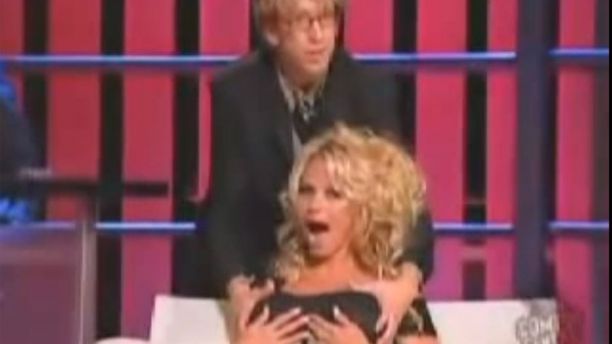 Final thought: You really have to wonder what’s up with people sometimes. This is the kind of sh*t that’s just not on. Come on blokes, let’s raise the game. Let’s not grope random women without an invitation. If you know someone who’s a dicey sort and gets up to a bit of that, tell them to pull their heads in – they’re giving us all a bad name and our mothers, daughters and sisters deserve a bit better. Sort it out, will ya?