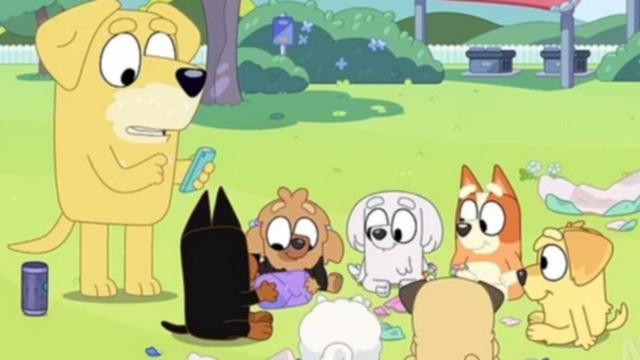 Those of you in the comments section who’ve got young kids will know all about Bluey, the Australian cartoon about the adventures of a dog named, well, Bluey. As well as being more popular with kids than the boy who can make fart noises with his knee, his elbow, his neck, and his ear, it’s also garnered praise from adults for its nuanced take on parenting in the modern age.

Yeah, nah, tonnes of people reckon that Bluey is a f**ken grouse show, and we’re not gonna argue with ‘em. After all, regardless of your individual opinion, you can’t argue with the numbers of people who say that it’s the bloody dog’s bollocks.

The new 'pass the parcel' episode of #Bluey is possibly the most complex observation of socio-cultural influences on parenting and growth mindset I have seen squished into 7 minutes.

Despite that, it’s caused a bit of s**t online by dealing with the issue of Pass the Parcel being the kinda party game that can create a generation of ‘squibs’ if it’s not played properly. Basically, a recent episode featured Lucky’s dad, a character in the show, saying, “We’re raising a nation of squibs,” if everyone wins a prize in the game, and that the kids who don’t get a prize should ‘suck it up.’

…and just like that, a national debate on Pass The Parcel rules commenced. #Bluey pic.twitter.com/42uriT03xI

Depending on how you grew up, you may have played the game so that everyone got at least something small – like a whistle or a Freddo Frog  – with one big prize at the end, or randomly-placed prizes throughout.

Is Pass the Parcel the greatest #Bluey episode of all time? And the longest?

And that’s what’s got parents having a bit of a debate. According to 7News, parents have been debating the issue online. They reckon parents have made comments like, “Pass-the-parcel should always be played with Lucky’s dad’s rules,” and “This episode perfectly captures my frustrations with a recent kid’s party. Absolute s**** in each layer and no one was engaged.”

Despite that, they also point out that other parents reckon, “There was definitely something small in every layer.” We don’t know how you used to play, but we reckon that Lucky’s dad has a pretty good idea about things.

Ok so apparently #bluey is stirring up nostalgia for when things were one sided and boring for everyone at a party.
Let me clarify, pass the parcel ALWAYS had a pressy for every layer.
What povo childhood did these people have where only the last player got something?

Although, if we’re honest, when you get those little s**tty prizes that are equivalent to a bloody Christmas cracker prize, you still know that you’ve won f**k-all.

At a children’s party today a child came up to me and asked if the pass-the-parcel was lucky’s-dad’s-rules. #win @OfficialBlueyTV #bluey #finally

Final thought: Yeah, to be fair, the show raises a good point, but when you get down to it, how you played Pass the Parcel probably has a lot to do with our background. The game varied. Still, what we want to know is this: how do you play, and do you reckon the parents care about this s**t more than the kids? Let us know.