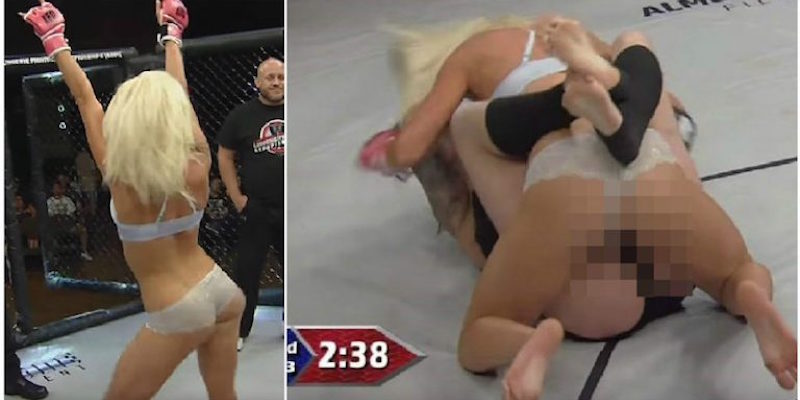 The Lingerie Fighting Championship Is Actually A Goddamn Thing!

You’ve probably heard of the Lingerie Football League but did you guys know there’s also a Lingerie Fighting Championships in existence?

Even though it is still relatively unknown to many fans of bouts and boobs alike, the new promotion did gain some mainstream media coverage when they held their 20th fight card, the incredibly named A Midsummer Night’s Dream back in 2015. The event was broadcast live on PPV on cable across North America and had a surprisingly huge amount of buys. I wonder why that was…

In a weird yet somehow wonderful spectacle, combatants enter the arena in a state of undress and try to beat each other into submission as the crowd cheer them on.

Publications ranging from Zoo in Australia, The Telegraph in the UK, and Sports Illustrated covered the event which took place in Las Vegas at the Hard Rock Hotel and featured 8 bouts with lingerie clad women duking it out. She doesn’t appear to be to concerned with fighting back, here…

The 21st installment of the controversial promotion was held in Nice, California, and was hugely popular, with fighters giving it their all in an attempt to brawl their way to the belt.

Understandably, the promotion has been slammed by some women’s groups for being sexist in the past with Nicola Miller of the Women in Sport charity asking “What does it say about a sport if the women must be sexualised in order to compete?” To be fair, she does have a point…

But event organisers and fighters alike deny any claims of sexism, stating that the women who compete are happy to be a part of the crazy spectacle.

The CEO of LFC, Shaun Donnelly, also commented on an article criticising his organisation last year, pointing out that the article itself was being a bit hypocritical by having a go at the promotion for sexualising the women but also running pics of some of the women in action.

He said: “While I don’t believe there’s anything sexist about LFC I always find it funny that these stories are always accompanied by as many of our photos as can fit.

“‘Oh, showing women in lingerie is sexist! Here’s a photo. Isn’t it awful? Here’s another.’” To be fair, he does have a point, too!

The tournament’s website claims that roughly 5 million people watched the 20th edition of the championships, whilst this year’s event claimed to feature “some of the most exciting match-ups in modern lingerie MMA history.”

Oh, and a few of the fighters featured in the December 2016 edition of Playboy if you want to, ahem, research these athletes a little more and gain some insight into the sport they compete in.

Take a look at the “highlights” from A Midsummer Night’s Dream on the player below: