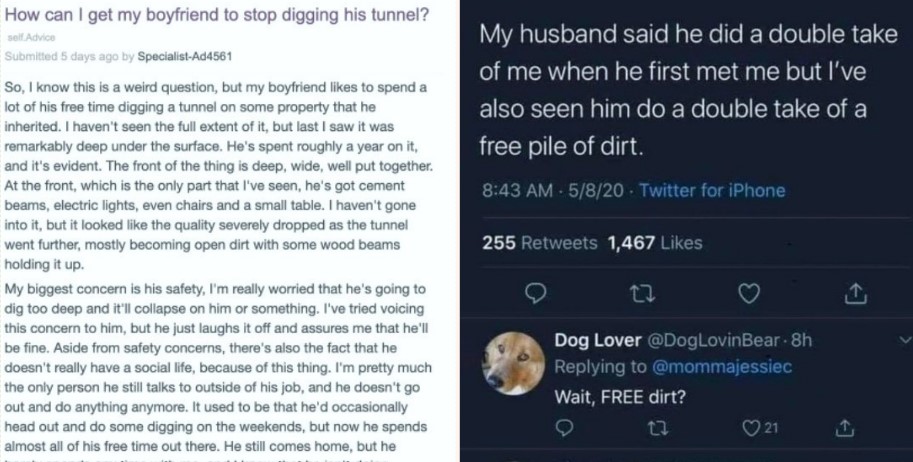 Sheila wants to know why her boyfriend won’t stop digging tunnel and the Internet responds!

Depending on your problem – and your audience – asking the internet to give you advice can be like playing Russian roulette. On one hand, you might be taken seriously and given the answers you need. On the other, people might just take the piss. When this sheila wanted to know why her boyfriend was obsessed with his tunnel, she got a bit of both responses. Mostly, though, people just took the piss. Have a squiz.

All right, before we get started with this one, we’re gonna give you a bit of context. The OP had a problem. Here it is in her own words:

what on earth is going on with men?? pic.twitter.com/jEVlhj0W3J

“So, I know this is a weird question, but my boyfriend likes to spend a lot of his free time digging a tunnel on some property that he inherited. I haven’t seen the full extent of it, but last I saw it was remarkably deep under the surface. He’s spent roughly a year on it, and it’s evident. The front of the thing is deep, wide, well put together. At the front, which is the only part that I’ve seen, he’s got cement beams, electric lights, even chairs and a small table. I haven’t gone into it, but it looked like the quality severely dropped as the tunnel went further, mostly becoming open dirt with some wood beams holding it up.”

Wait how big is the pile

From there, she explained that she was worried about him:

“My biggest concern is his safety, I’m really worried that he’s going to dig too deep and it’ll collapse on him or something. I’ve tried voicing this concern to him, but he just laughs it off and assures me that he’ll be fine. Aside from safety concerns, there’s also the fact that he doesn’t really have a social life, because of this thing. I’m pretty much the only person he still talks to outside of his job, and he doesn’t go out and do anything anymore.”

Maybe the tunnel digging is his therapy?

Now I want a goddamn tunnel

And then she goes on to explain that it’s harming his social life:

“It used to be that he’d occasionally head out and do some digging on the weekends, but now he spends almost all of his free time out there. He still comes home, but he barely spends any time with me, and I know that he isn’t doing anything but digging that damn hole in the ground. This can’t be good for his mental health, but I don’t know how to convince him to stop. He’s always really happy when he comes back from digging, which is why I haven’t seriously tried to stop him before, but I was talking to a friend about him, and she told me he might be going crazy. Obviously I don’t think he’s insane, but I hadn’t considered the mental health aspect of this, and I just don’t know what to do.”

As we’ve said above, she asked, and the internet answered. When this thing hit Twitter, people were all over it. Have a scroll through some of these responses to see what we mean.

We killed it with hammers btw. No one fucks with my buddy sean

Don’t forget, though, there was an update. You can check that out below.

Final thought: What we want to know is simple: where’s the tunnel and can we dig too?