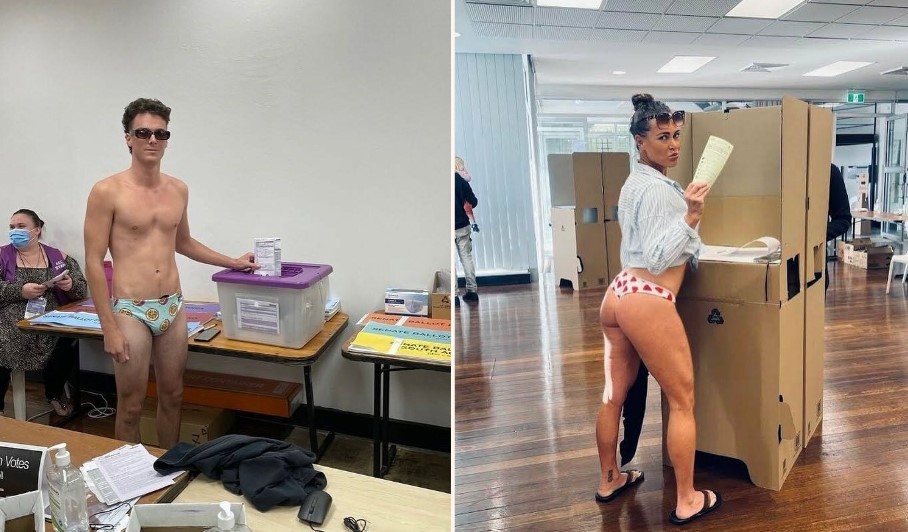 Before we go on and explain why, we have to tell you why we hoped this was the case. For years, former PM Scott Morrison was plagued by the ‘fact’ that he once shat his pants at the Engadine McDonalds restaurant. Yeah, nah, you might say that story really left a mark on Scomo’s career.

#SmugglersDecide – Vote in Smugglers for a Free Pair.

The election is coming in hot and while we don't mind who you vote for, we do want you to exercise your constitutional right to vote without pants on.

As a result, we hoped this might be some sort of living meme designed to commemorate the federal s**tting of the pants. Alas, though, it wasn’t. Yeah, nah, it was more of an advertising stunt that saw undies company Budgy Smuggler, offering a free pair of pants to anyone who voted in their jocks.

Win a free pair of Smugglers by:

🗳Vote in Smugglers or Smugglettes
🗳Capture a photo similar to these
🗳Post to socials with #smugglersdecide by 3pm this Saturd… https://t.co/eVqz0SPRtW pic.twitter.com/tITSI0wlYS

As you can tell, loads of people got on board with the idea. To score a voucher for the free undies, all they had to do was go and vote in nothing but their skivvies and upload a photo to social media along with the hashtag #SmugglersDecide.

Adam Linforth, the owner of Budgy Smuggler reckons, “We thought maybe one or two would do it … hundreds have turned out. It’s going to be an expensive day for Budgy Smuggler.”

It’s gonna be an expensive Election Day at Budgy Smuggler. We expected maybe a few people would take up he offer to vote in smugglers for a free pair… we’re up to over 100 and it’s only 11am. You’re all lunatics but in a very good way. We’ll get the … https://t.co/9vLKWekXI5 pic.twitter.com/0xzSdogQCA

Final thought: Yeah, nah, this is bloody grouse. We do wish it had commemorated the only time Scomo ever followed through on anything, but hey, free undies are free undies, so we can be thankful for that. If you scored a pair, let us know in the comments section!