Group of cyclists go tumbling after ute overtakes and brakes, the Internet is divided

We love to give everyone a fair tug of the turkey here at Ozzy Man Reviews, but some blokes and blokettes don’t help themselves. Obviously, cyclists are right in the midst of that group. Personally, we think the idea of cyclists is f**ken great. Their mode of transport is good for the environment, their hobby is good for their health and their fashion boosts sales of lycra. That’s all f**ken grouse. It’s just that sooooo many of them love a bit of drama. 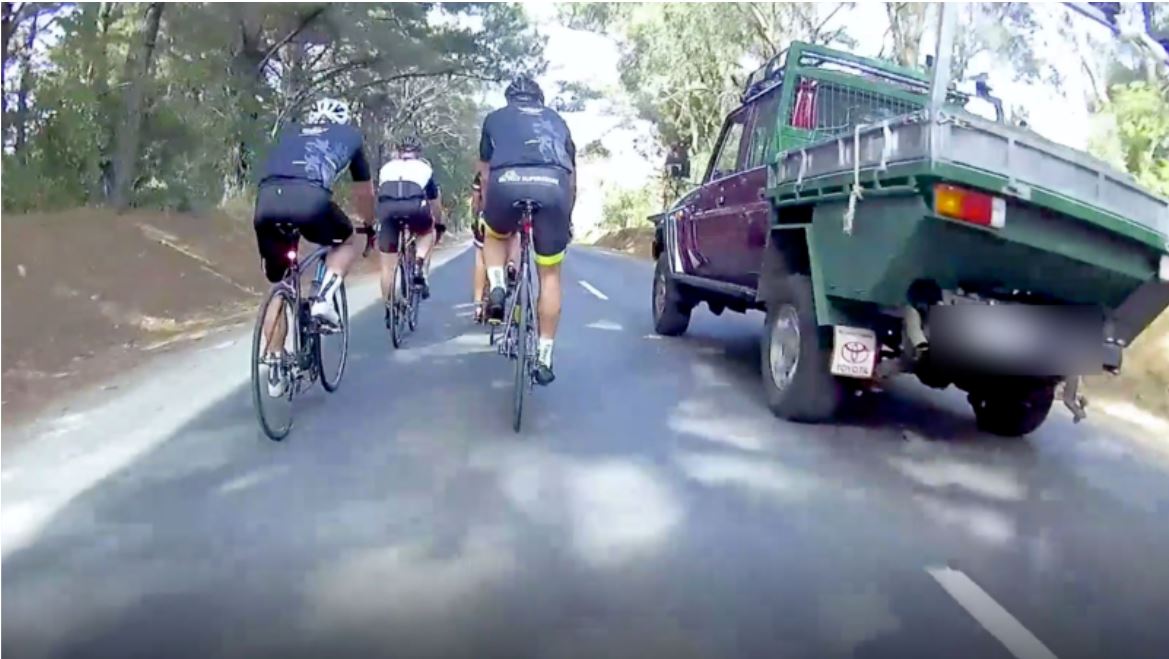 We don’t know about you, but when we were riding to school as kids, we used the footpaths and bike-lanes. It was piss-easy to do, it kept us out of trouble and it fair dinkum made sense. Seriously, if there was more than two of us, we even made sure we didn’t bunch up and take the whole f**ken road. And you know what, we had the time of our bloody lives.

Sometimes, cars even had to go past us on the road. When that happened we got out of the f**ken way because we had no idea that as cyclists we actually owned the road. Yeah, nah, we were like that f**ken car is big and heavy and fast and it will f**k us right up.

That’s why we’re not sure most adults who’ve taken cycling up as a hobby rode bikes when they were younger. They just don’t get the basic s**t. They seem to think that because cars aren’t technically allowed to hit them, it’s totally f**ken fine to hog the road and not get out of the way. 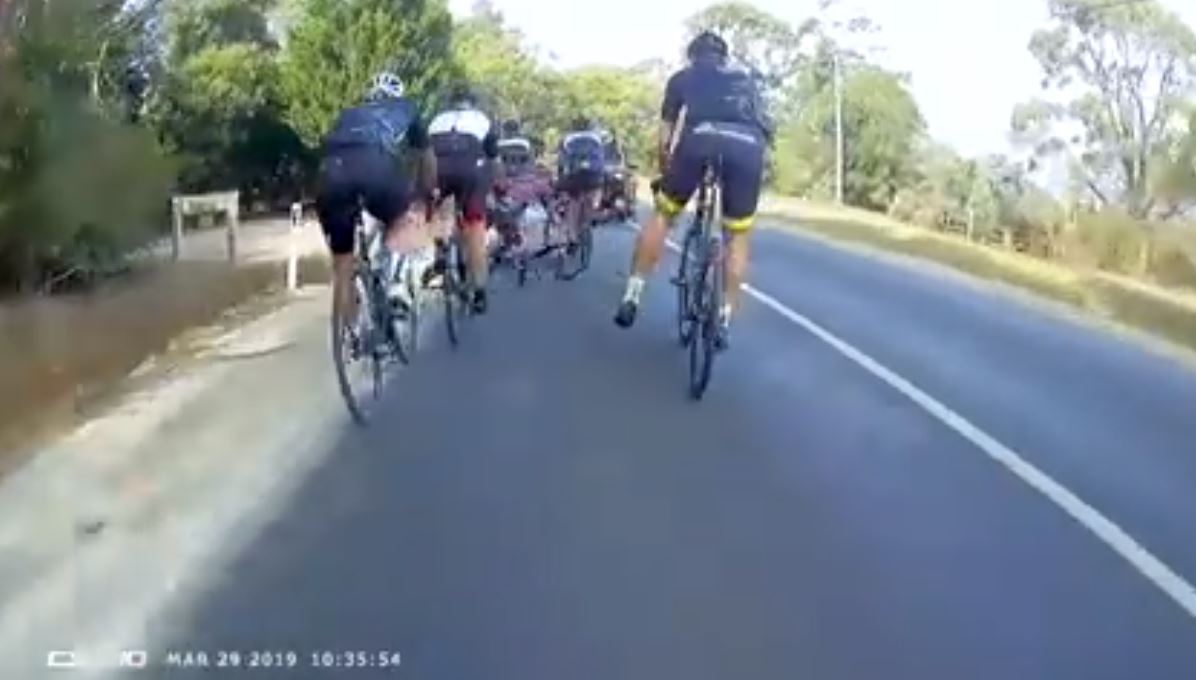 And that brings us to our video today. A cyclist known only as Clint – and, yeah, of course his name’s f**ken Clint – was riding with a group of his mates when a ute had to overtake them. Naturally, as adult cyclists, they didn’t go, ‘Woah, f**ken ute! Look out!’ Yeah, nah, they just kept going and kept hogging the road.

The ute comes past – and it has to f**ken turn. Clint reckons the ute driver suddenly slammed on his brakes, causing an accident, but to us it looks like a fair whack of time passes after the ute goes around them. Once he does, the cyclists maintain speed before s**t goes awry.

And that’s when the best bit happens. It’s hard to really see how it’s caused, but two of these road-hoggers eat f**ken s**t. It’s great. One minute, they’re cyclists, and the next they’re going arse over tit. F**ken gold! 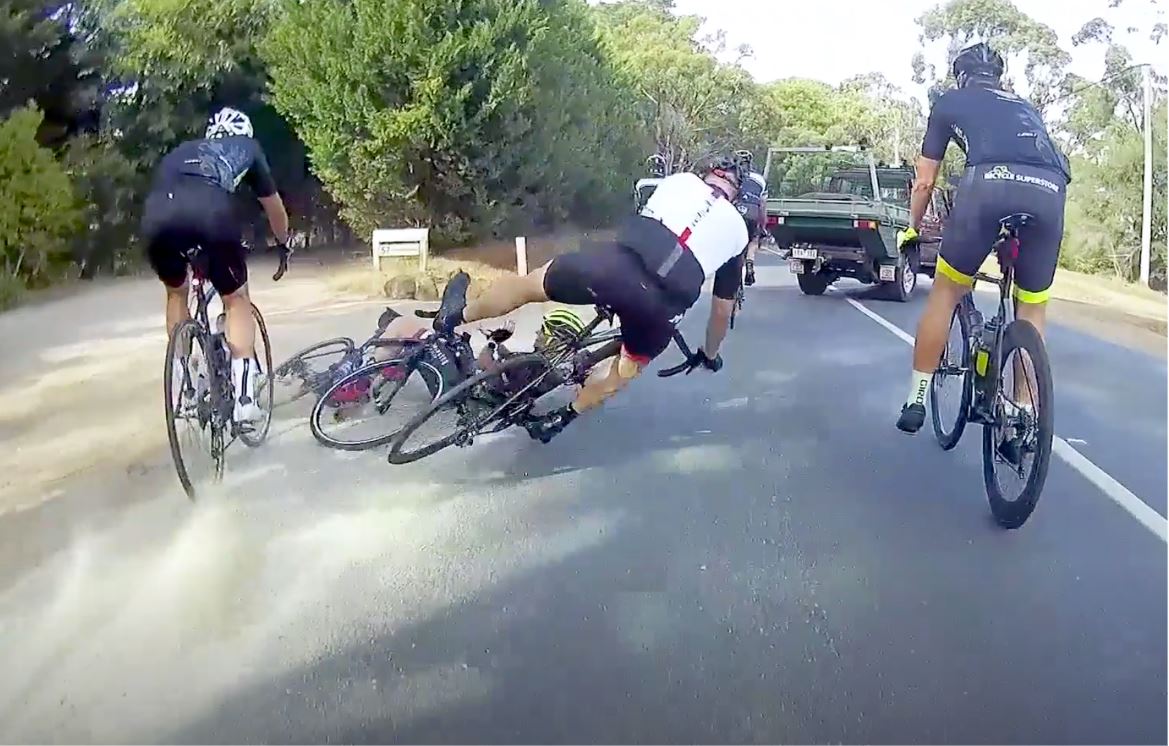 Anyway, our mate Clint got pretty bloody grumpy about it and uploaded the footage from his helmet camera to the internet. He even told News.com.au all about it.

“You can clearly see it was deliberate, it was a very dangerous and stupid manoeuvre. As soon as he overtook us he slammed on the brakes. It was very unnecessary and very aggressive. People dehumanise other human beings if they are riding a bike on Australian roads and it’s very sad.”

We guess that after that he told his mates what a good thing he’d done. Dudes named Clint are usually like that. Unfortunately, Clint didn’t get to bask in the adoration of the masses. Yeah, nah, they just f**ken chopped him. Have a squiz at the comments.

“If they were riding in a single file there wouldn’t be absolutely any problem.”

“If the driver brake checked them, then how come the two lead cyclists managed to not stack it? Not to mention the fact that the driver had his indicator on as well as a whole 7 seconds going by before he turned after making the pass.”

Final thought: What do you blokes reckon? Is the ute-driver a scum-bag or are the cyclists in the bloody wrong again?