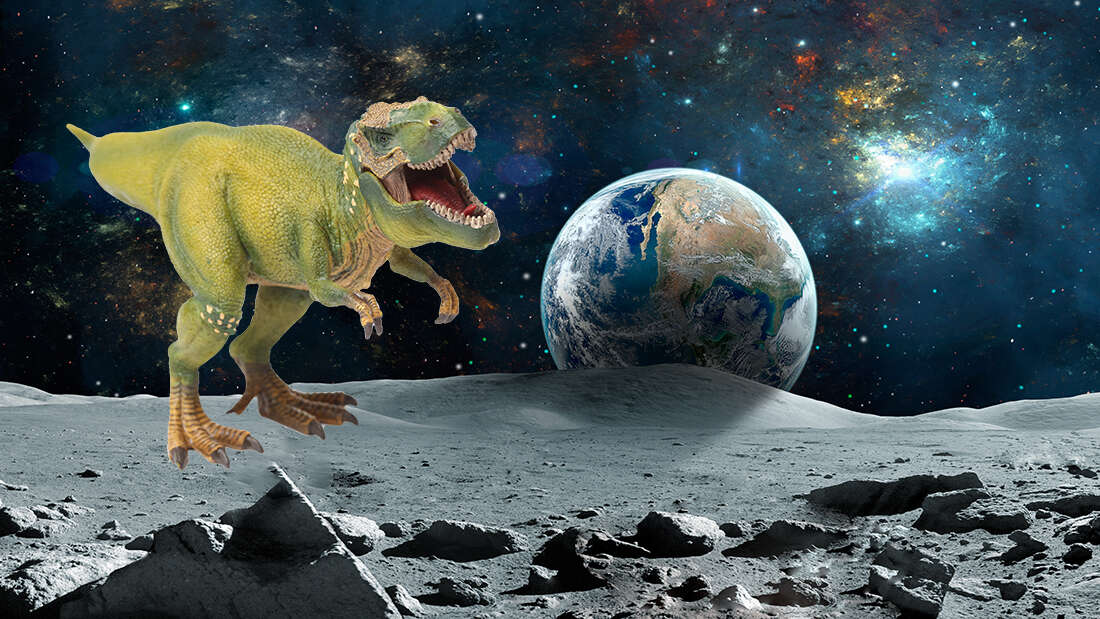 Yeah, nah, no s**t. They might not be alive, and they might not have donned spacesuits and travelled there the old-fashioned way, but scientists are pretty f**ken confident that there are bits of dinosaurs plastered all over that big old hunk of rock in the sky. F**ken read on to get the goss.

All right, so we’re gonna assume you know what dinosaurs are and that you’re pretty familiar with the idea that they died out millions of years ago. And that’s an important point to make in this story, because if you know how they died out, you’ll know that the poor f**kers went for a long nap when the earth was hit by an extinction-level asteroid.

This description of the asteroid that killed the dinosaurs is probably the best piece of writing I've read in a while. That was beautiful. pic.twitter.com/13iLrLrMe2

And that’s exactly how scientists reckon bits of dinosaurs ended up on the moon. Basically, if you’ve ever f**ken jumped onto something to squish it, leaving bits of it to burst up and collide with nearby bodies, you’ll understand what the scientists are positing.

The Ends of the World: Volcanic Apocalypses, Lethal Oceans, and Our Quest to Understand Earth's Past Mass Extinctions

Basically, as you’ll see from the images in the tweet below, the asteroid that sent the terrible thunder lizards – and all their mates – to Destination F**ked, hit the earth so hard that the resulting hole it ripped in the atmosphere sucked up and spat out anything in its path.

dinosaur ghosts on the moon.

astronauts being run down by a spectral t-rex? i'd so watch that movie.

Have a go at this quote from Peter Brannen, whose books is pictured in the tweet:

“As the asteroid collided with the earth, in the sky above it where there should have been air, the rock had punched a hole of outer space vacuum in the atmosphere. As the heavens rushed in to close this hole, enormous volumes of earth were expelled into orbit and beyond — all within a second or two of impact.”

And that’s how dinosaurs ended up smeared across the moon. Bewdiful!

Final thought: While those few seconds of sheer terror must have been truly horrendous for any stegosaurus caught in the explosion, this s**t’s still pretty cool. Yeah, nah, if we’re still around when an asteroid hits earth again, we wouldn’t mind going out this way. What about you?

Just in case you missed it, here’s one of Ozzy’s latest commentary videos…Ozzy Man Reviews: Godzilla Vs Kong Trailer