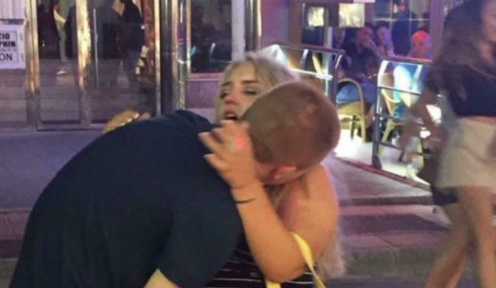 Exactly how much of a prick can you be whilst breaking up with someone? How about posting a picture of your ex getting fingered in a public place and tagging every family member of hers you know to the image. OMG TOTALLY SAVAGE YEAH?! Websites have reported that one of his ex’s family members responded to the post. “You put our entire family through a roller coaster for what? I hope it was worth it. You really had done it. Delete this post.”

Clearly, they initially thought she had actually gone missing. Or at least they would’ve, if it didn’t turn out to be complete bullshit. But plenty of people took the bait and circulated the original post. The original image showed up and started doing the rounds on Twitter on June 10th, two days before the post was made, with some amusing captions. Who knows how long it’s actually been circulating around the internet – pretty much once something like this is online, it never dies.

Credit: Twitter – No one told me it was ever gone?

The whole entire thing started because some random chick got finger-banged by some random dude at some random time in the past. It has been shared around and taken down a few times on Twitter.

It’s most recent revival is due to a guy named Kurtis G Mulvaney trying to get follows on his Snapchat. To that end, he’s probably done damn well. Even he admits its all a load of crap on his own Facebook, not even knowing the origin of the original photo.

Just goes to show, people will believe just about any shit they hear on the internet.