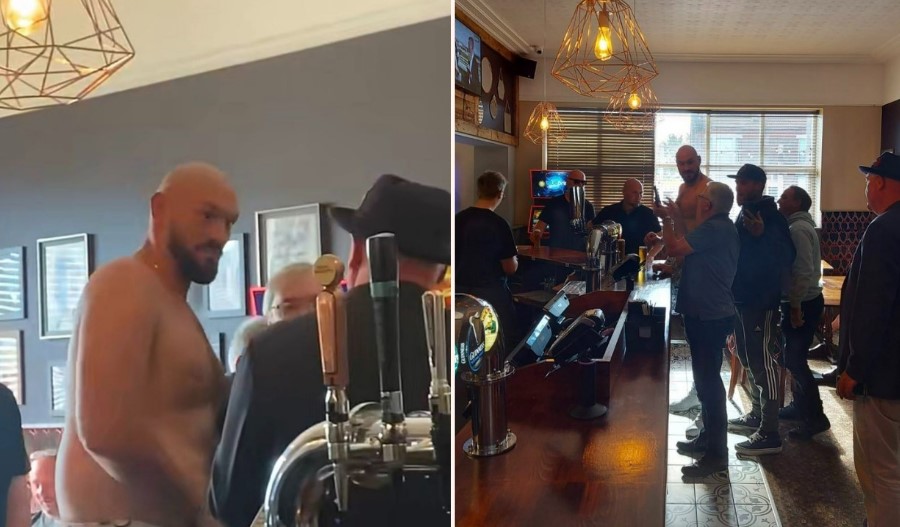 Those of you who follow your boxing will know that Tyson Fury, the Gypsy King isn’t exactly your stereotypical athlete. Don’t get us wrong, he’s literally a f**ken champion, but he seems to take great pride in just being himself, living his life his way, and being a man of the people. And that’s probably why he – like everyone else sensible – loves a brewski. Yeah, nah, deadset, he does. Check it out…

All right, this story came to light a couple of days ago. We love it for a couple of reasons. Namely, it’s got beer and it’s got sport. We could probably add more reasons to that list, but let’s be honest, you just wanna know what the f**k happened.

Tyson Fury in the Queens in Aintree pic.twitter.com/K1grXDuVeN

Basically, locals were enjoying a nice pint at an Aintree pub in Pommyland when Tyson Fury came in, whipped off his shirt, knocked back a beer, posed for a few photos and f**ked off again. Yeah, nah, that’s the gist of it right there.

Fury is currently touring the Pommyland as part of his Official After Party Tour. Fury, who still maintains that he’s retired despite plenty of talk to the contrary, has been travelling all over England and taking in the sights.

Still, one of the bartenders working at this Aintree watering hole reckons he didn’t recognise him at first. “Nobody noticed him at first as he just walked through the bar.” That shit changed quickly after Fury lost his top, though.

“He then came out of the bathroom and started taking photographs with everyone. He was only in there for five minutes. He had a suit on originally, but I think he took his top off because everyone had already noticed him.”

And you’ve gotta say, even if he wasn’t there long, it’s pretty f**ken good to see him being a man of the people. Yeah, nah, you’ve gotta love that.

Final thought: This has got us thinking about the celebrity encounters you might have experienced in your watering holes. Who’s come into the pub when you were there? Let us know in the comments section.

Just in case you missed it, here’s one of Ozzy’s latest commentary videos…Destination F’d Vol 22