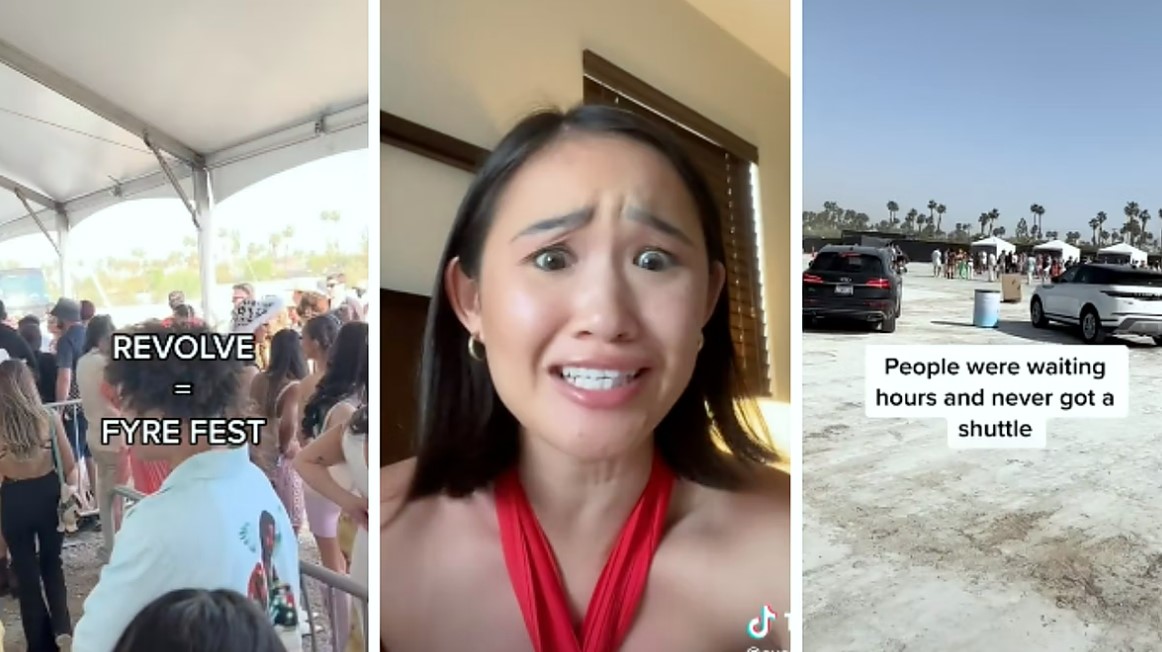 Look, in recent years there’s a pretty big push to act sensationally when festivals f**k up. As we’ve covered plenty of that ground in the past, we won’t go into too much detail, but from the looks of things, the Revolve Festival can go down as another failure. To be fair, it’s not an epic failure that stooped as low as some recent fests, but what’s happened doesn’t look good, and comparisons to the infamous Fyre Festival are coming in thick and fast…

OK, for those of you who aren’t aware of Revolve Festival, it’s an interesting beast. According to reports, it’s an “annual invite-only music, arts and shopping event, hosted by online retailer Revolve and held alongside the first weekend of Coachella. Attended by influencers, the festival is known for its social media displays, A-list musical acts and “free” clothes as part of the ticket price.”

BREAKING @LAMag #Coachella Dispatch: Sources on the ground telling us there is apparently drama going down at Revolve Festival, that "sinks to level of Fryre Festival." Influencers stranded in the dirt with no water, under the hot sun for HOURS, waiting for buses that aren't…

We’re not gonna s**t on that concept because if that’s your thing, we want you to enjoy it. Unfortunately, though, according to reports coming out of the joint, the invited attendees simply couldn’t enjoy it.

Guests were left stranded in the car park without water as they waited hours for buses that didn’t arrive. As you can imagine, TikTokkers and Instagrammers jumped online to lambast the event, calling it Fyre Festival 2.0.

coming to bring them to actual festival. “Alleged fights, screaming, everyone is dizzy.” @LAMag told that police are coming. AND in an “Only in LA Moment: Coachella Edition: Security had crowds of influencers yelling how “important they were and why they deserved the first seat”

Joseph Kapsch, executive editor of Los Angeles Magazine reported on Twitter that the whole thing was a mess, saying, “Sources on the ground telling us there is apparently drama going down at Revolve Festival, that “sinks to level of Fyre Festival.” Influencers stranded in the dirt with no water, under the hot sun for HOURS…”

He describes the whole thing as pretty gross, but Revolve has now apologized to its guests, stating that it was putting their safety first.

.@LAmag sources spoke to security on the ground about the chaos and one of the guards said, “I don’t know who the F these people are. I don’t who is actually important and who is lying or if any of them are important.” More to come.

“With an event of this magnitude, city regulations mandate an off-site location for guest check-in and parking, as well as licensed shuttle transportation to and from the venue. The off-site lot was set up with guest parking, as well as rideshare drop-off and pickup access with added WIFI for car booking, restrooms, shade, water, medics and security.

As the festival was reaching capacity late Saturday afternoon, shuttle access to the venue was limited in order to remain in compliance with safety requirements causing longer wait times for entry and resulting in some guests not being able to attend the festival,” the statement continued.

The safety of our guests is of the utmost importance to us and we will always make that a priority.

We sincerely apologize to all the guests who were impacted. We always strive to provide a great experience and we promise to do better.”

Narrator: "None of them were important."

Final thought: Look, who knows what would have happened if people were allowed inside an unsafe event, and we have to be pragmatic in not speculating too much there, but it raises that little question again: are the days of music festivals as remember them over? Let us know what you think in the comments section.

Just in case you missed it, here’s one of Ozzy’s latest commentary videos…Ozzy Man Reviews: The Strangest Ads in History