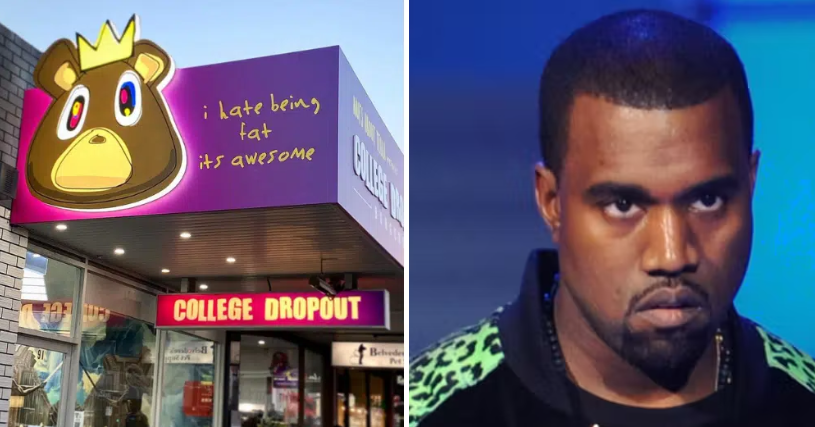 The world of the rich, famous, and self-obsessed is a f**ken weird one. Yeah, nah, don’t give us that look, it is…it really is. One of the things that goes with being a world-renowned star is people loving your s**t, of being inspired by it, and of paying it tribute with their own creations. We see it all the time in movies, songs, books, comics, games, artworks, and even, to an extent, general conversation. So, when a Melbourne burger joint wanted to pay homage to Kanye West, you might’ve thought he’d be down with it…

Obviously, he f**ken wasn’t. As you already know from the title, he wasn’t down at all. If we’re completely fair, it’s his prerogative to not like people using his likeness and his branding to make a profit. It’s just that this one feels a bit…unfair.

Before we go opining the state of the world, though, we’ll check in with Mark Elkhouri, the owner of Melbourne’s College Dropout Burgers. Eagle-eyed fans of Kanye will know that’s the name of his 2004 album, and that Elkhouri’s love for the rapper is right there on the tin. That’s why he was stoked when he first noticed Kanye watching his Insta stories.

He commented in another post, “What is happening here?? I must have “found God”, because @kanyewest has been deep in our stories. Over 10 story views now!! Ye – “call me, bruh. You still ain’t called me? Ye, I know you got killers. Please don’t send them at my head. Please call me”

Evidently, though, Kanye did send his killers. Yeah, nah, they came in the form of a cease-and-desist letter, forcing Elkhouri to change s**t up. Despite being a bit bummed about it, he realizes it’s just business.

“In some ways I was disappointed. But I support Kanye. The guy is my f**king hero. There’s no denying how important he is to society. So the real question is how do I take it? At the end of the day, I have to respect it.

“I was hoping to settle it with his lawyers, but it wasn’t to be. The name College Dropout will now become synonymous with other college dropouts. It might be a blessing in disguise. Not everyone is a Kanye West fan.

“It was never about publicity. The name isn’t just a reference to his first album, it’s about what we set out to accomplish. I wanted to change that narrative of Kanye West being seen as ‘crazy’ and I wanted people to revisit his music … I haven’t stopped playing Kanye West’s music here.”

And that’s why we think this is a bit unfair. Don’t get us wrong, we’re not lawyers, and we can definitely understand why some of the logos and things are a bit on the nose, but burgers and meals become homages to musical artists and celebrities all the time.

Still, it looks like Kanye’s got what he wanted, and the joint has had to rebrand. Elkhouri is now homaging different celebs, like Brad Pitt, Quentin Tarantino, Prince, and Mark Zuckerberg.

Final thought: All right, folks, share your thoughts on this. We get that it’s Kanye and he does what he wants, but is this a wise move? Was Elkhouri profiting from the dude, or was he inspired by him. Sound off with your opinions in the comments section.

Just in case you missed it, here’s one of Ozzy’s latest commentary videos…They’re evolving! Cyclists #2