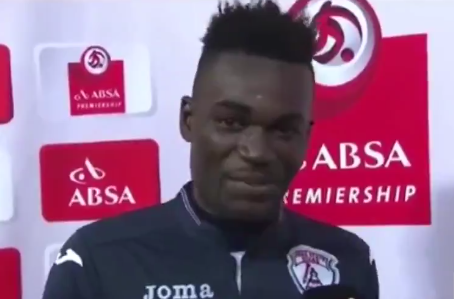 Fellas, the number one rule out there for blokes with a side chick is to make sure that they NEVER EVER FIND OUT ABOUT EACH OTHER. It’s the simple and effective guys (some of us anyway) have been having their cake and eating it too since time immemorial. Most guys know the rules: don’t go out where the other one might be. Make sure you have different phones for each girl. Always call them baby or baby or sweetie so you don’t accidentally say the wrong name.

Well, Mohammed Anas, who plays for South African team ‘Free State Stars,’ officially put his foot in it during an interview last week. While accepting his Man of the Match, Anas thanked his wife, THEN HIS GIRLFRIEND. Bloody hell mate, you couldn’t have blown it any worse!

Anas appeared to dig himself into an even bigger hole when he more recently said he was talking about his daughter in the now legendary interview. “My family knows that I call my daughter my girlfriend. That’s what I was talking about. I don’t have a girlfriend,” the Ghanaian striker said.

Watch the greatest man of the match speech of all time below:

VIDEO: Mohammed Anas just gave the greatest MoTM speech of all time, thanking both wife and girlfriend. (Via @clydegoal) pic.twitter.com/gXJ4ZwOtdg

Of course Anas isn’t the first bloke to be busted in live TV. Who remembers the time at a Houston Rockets game when they cut away only to see a couple walking hand in hand through a mall? Only when they realised that they were on TV did they try to split up and walk in different directions. Another fella bites the dust.

Blokes – be careful out there.